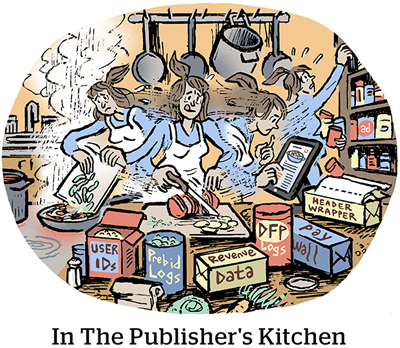 The ability to dynamically scale creative and A/B test dozens – even hundreds – of ad campaign permutations, all potentially targeting specific audience types, has led marketers away from making a single piece of creative that stands alone and appeals to as many people as possible.

But is that a good thing? Not really, writes marketing consultant Samuel Brealey in a blog post.

“The temptation in the last ten years has been to see advertising and marketing as a feat of engineering due to the explosion of new technology and to outsize its importance in the marketing toolset,” Brealey writes.

The enthusiasm for personalization is simply adding complexity and cost to campaigns.

Rather than getting back to basics, brands have increased segmentation to the point that it’s holding back marketing. By slicing audiences into finer and finer segments, marketers end up creating audience pools so small that they have diminishing returns. Finding women with children who are passionate about homeware goods could take a universe of 100,000 potential customers down to a few thousand. It’s a bad trade-off, despite what seems like a targeting advantage.

Comeback stories are rare on the internet.

But About.com is an exception to that rule. Under CEO Neil Vogel’s leadership, the Web 1.0 fixture was transformed into Dotdash-Meredith, IAC’s leading cashflow contributor.

In Brian Morrissey’s The Rebooting newsletter, Vogel details how Dotdash-Meredith’s emphasis on intent-driven audiences, page-loading speeds and fewer, higher-quality ads has been a recipe for success in today’s harsh publishing market.

For Vogel, the media game is simple: “Collect and serve audiences that are valuable, make yourselves valuable to them, deliver them to advertisers in a way that works for your audience and your marketer.” Oh, is that it?

And, regarding ecommerce, he says publishers should focus on affiliate marketing rather than manufacturing their own products.

The traditional approach to media may seem counterintuitive as digital publishing and ad tech continue to converge. But Vogel offered this advice for advertisers: “Anybody who thinks they’re going to reinvent the rules of historical media, don’t give them money. Any publisher that tells you they’re a tech company, run for the hills.”

Disney and Uber appear to be co-marketing pretty heavily at the moment: Disney to refill its Disney+ prospect pool, and Uber is just thirsty for advertising partnerships.

For one thing, this week, Uber and Disney unveiled a subscription promo that offers two free months of “the Disney Bundle” (Disney+, Hulu and ESPN+) to Uber Eats customers. And vice versa: Disney+ subscribers can redeem six free months of Uber One (a $100-per-year membership program with free or discounted rides and Uber deliveries), plus a $25 credit on their first Uber Eats order.

Streaming content partnerships are low-hanging fruit for Uber Ads, as the company’s data-driven media business is called. Uber riders – especially Uber One subscribers who use the service regularly or for longer stretches – could be tempted by a streaming trial when they face a longish ride.

Michelle Grant, Salesforce’s senior manager of insights for the retail and consumer goods category, tweeted an Uber in-app ad experience that persistently offered a UFC stream. You could buy the UFC stream or, hey, guess what: It comes with the Disney Bundle.

TikTok has a few main ingredients for making money. [Bloomberg]

More on TikTok: An FCC commissioner calls on Apple and Google to remove TikTok from their app stores, calling the app a national security risk. [Insider]

Netflix disrupted entertainment with binge viewing. Now can it avoid disruption itself? [WSJ]