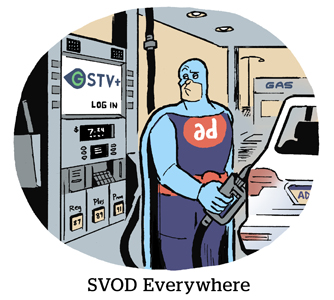 Crisis pregnancy centers, a deceptive moniker for anti-abortion nonprofit groups that target women seeking medical services and/or abortion providers, are sharpening their ad tech chops as they take advantage of new laws targeting abortion providers and the women who seek abortions, including women who have had a miscarriage.

These centers have no medical data privacy rules. People who show up to these clinics expect discretion from doctors – but soon learn there is no expectation of privacy. Some are horrified to discover they’ve passed private, potentially incriminating data to organizations staffed by people who not only haven’t taken the Hippocratic Oath, but who actively send information to prosecutors when, for instance, women they’ve confirmed are pregnant don’t give birth (and, thus, may have left the state to obtain an abortion).

“The data your organization collects needs to work not just for you, but for the rest of the pregnancy help movement,” according to the website of one SaaS software tool that tracks patients for pro-life clinics. “As we pool together what we’ve learned separately, we can begin to wield game-changing predictive and prescriptive analytics that lead to stronger outcomes.”

With moviegoing approaching pre-pandemic levels, streaming players are trying to figure out whether they should release titles on-demand or save them for the theaters.

It’s a subtle dance they must dance between demand, sales and distribution deals. And it’s no simple process. Sometimes timing even varies between titles that would likely appeal to the same audiences.

The most recent installment in the “Doctor Strange” series from Marvel Studios, for example, premiered in May and became available on Disney+ last week. But “Spider-Man: No Way Home” – also a Marvel title – is still in theaters only, despite hitting the box office back in December.

“Doctor Strange” brings Disney more in line with other major studios, which usually opt for around 45 days of “theatrical exclusivity,” CNET reports. A month and a half gives fans plenty of time to catch flicks in theaters while keeping the hype train chugging through to VOD.

But there’s no industry standard. Disney has flexibility because it owns the studio and the streaming service. But Sony, the studio behind Marvel’s Spider-Man series, is beholden to its pre-pandemic contracts. Sony and Starz struck a deal in 2017 requiring Sony to hold movies back from streaming for six to nine months after release (which is also why “Spider-Man: No Way Home” fans won’t find the movie on TV until July).

The surging price of gasoline is prompting the ridesharing industry – drivers and ride-hailing apps – to lean further into advertising to offset the cost.

On the one hand, it’s a bummer for the driver. It’s actually their car, generally, and usually earning ad revenue means covering their vehicle in a branded decal. But even a couple hundred bucks per month, as a campaign typically offers, helps – particularly when it’s guaranteed over a few months.

Uber and Lyft are also in talks with rideshare-based advertising services – Wrapify and Carvertise, to name a couple – as a potential add-on income source to offer drivers.

But it isn’t just the rideshare services themselves, either. In January, T-Mobile’s ad business acquired Octopus Interactive, an ad seller that gets drivers to install a tablet that riders can use to play games or watch shows (and ads, obviously).

What’s expected of brands now that Roe v. Wade has been overturned. [Adweek]

… and what the repeal means for privacy. [The Drum]

The vast majority of the most-watched broadcasts on television are sports and, in particular, NFL games. [Axios]

Why does everything in tech feel like a scam right now? (Says the creator of Dogecoin.) [Vice]

Expect ad-supported tiers on Netflix by the end of this year. [TechSpot]

At VidCon, Gen Z says which digital video platforms they do and don’t like, and why. [Digiday]