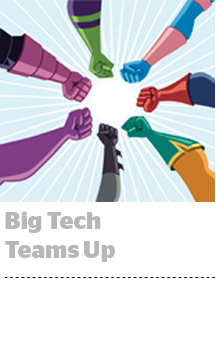 Fox Corp. didn’t have its own streaming platform, so it used the sale of its stake in Roku to buy Tubi. The $440 million acquisition puts Tubi’s ad-supported streaming platform in direct competition with ViacomCBS’ Pluto TV, Comcast’s Xumu and Sony’s Crackle, The Verge reports. Tubi will retain its brand and run as an independent service, but Fox will use it to provide older TV shows and movies to subscribers for free. Tubi will significantly expand Fox’s DTC audience and capabilities, Executive Chairman and CEO Lachlan Murdoch said in a statement. Read the release. “Importantly, coupled with the combined power of FOX’s existing networks, Tubi provides a substantial base from which we will drive long-term growth in the direct-to-consumer arena.” More.

Big tech has put aside its competitive rivalries and come together to fight misinformation in the wake of the COVID-19 pandemic. Facebook, Google, Microsoft, LinkedIn, Twitter, Reddit and YouTube are working together to combat fraud and misinformation and highlight authoritative content and government updates on their platforms. “We invite other companies to join us as we work to keep our communities healthy and safe,” the companies said in a joint statement released on Tuesday. The teamwork was sparked by US government CTO Michael Kratsios, who held a meeting last week to coordinate efforts. But it could be tricky for the platforms to parse all the misinformation out there. “We’re not just fighting an epidemic; we’re fighting an infodemic,” said Tedros Adhanom Ghebreyesus, director general of the World Health Organization. “Fake news spreads faster and more easily than this virus, and is just as dangerous.” More. The government is also in talks with Google, Facebook and other tech companies on a way to aggregate location data to help track infections and identify potential exposure sites, The Washington Post reports.

Google warned advertisers, publishers and YouTube creators to expect less accurate ad moderation and more delays in approving content for monetization while the company transitions to a remote workforce. Google is being forced to increase its automated content moderation, instead of relying on people to backstop approval decisions, CNBC reports. “This means automated systems will start removing some content without human review, so we can continue to act quickly to remove violative content and protect our ecosystem, while we have workplace protections in place,” Google wrote in a blog post. More.

LinkedIn is jumping on the messaging trend with an ad format that uses interactive prompts to automatically nudge prospects down the funnel in a way that mimics the back and forth of a real conversation. The cues within Conversation Ads include calls-to-action such as downloading a white paper or registering for a webinar. LinkedIn users can take action on the prompts without leaving their inbox. “Messaging is only going to grow, and it’s the preferred mode of communications among professionals,” Abhishek Shrivastava, senior director of product at LinkedIn, told AdExchanger. It’s also becoming the preferred mode of communication now that working from home is the new normal and in-person networking is on hiatus thanks to coronavirus. Shrivastava declined to share whether LinkedIn is experiencing an uptick in use or traffic since the coronavirus outbreak began. Read the blog post.