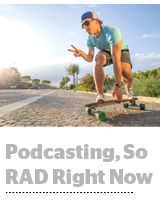 Netflix shares are down more than a third over the past six months as investors worry about its debt and high costs. Netflix built its position in OTT with few competitors (HBO and Amazon Prime were pretty much it) – but competition is heating up. Amazon, now one of the three largest companies in the world, can spend on programming at a different level and has a monster ad business. Disney’s planned streaming service can harness content from Pixar, Star Wars, Marvel, ABC, ESPN and Disney studios. AT&T, meanwhile, bought HBO with the rest of Time Warner’s media empire and is launching a streaming service, too, with its ambitions also supported by a growing ad business in Xandr. As telco-broadcasters introduce proprietary subscriptions, they pull content from Netflix, putting the cash-strapped (and debt-strapped) category leader in an untenable position, writes financial analyst Stephen McBride at Forbes. More. McBride considers three solutions for Netflix – raise subscription prices, cut back on content or raise more debt – but each is a poison pill. The other remedy is for Netflix to introduce ads or ramp up marketing with sponsorships or product placement.

Hulu will expand its programmatic business beginning in January with a new private marketplace to buy on-demand or live TV inventory. The idea is for more data-driven bidding to be done without going through Hulu’s ad sales teams. The marketplace will be invite-only to start and won’t interfere with upfront buys or other sponsorships and product placement deals, Ad Age reports, so it’s unlikely to be a major swing for Hulu’s programmatic sales. But, unlike previous PMPs Hulu has introduced such as one with Oracle and Facebook in 2015, this product will allow marketers to bid in real time based on audience data instead of targeting specific audiences at a preset price. More.

Google will shut down its Google+ social network after a software bug exposed the profile data of 52 million users to app developers. This is the second data breach of Google+ this year, after The Wall Street Journal reported a hack in October that Google declined to disclose for fear of “immediate regulatory interest” and being compared with Facebook’s Cambridge Analytica scandal. Google planned to shut down Google+ by August 2019, but moved the date up after discovering the second bug. The news comes on the heels of CEO Sundar Pichai’s testimony in front of Congress, which touched on concerns over data privacy at Google. [Read AdExchanger’s coverage.] And so, this marks the final resting place of Google’s homegrown social media entrant, a mix between Facebook, Instagram and LinkedIn that carried all the privacy risks but none of the engagement. More.

NPR has deployed its Remote Audio Data (RAD) podcast measurement system for an open source release. RAD promises to make podcasts more measurable beyond the download by inserting a URL into the MP3 file through which players can send back listening events, like whether a listener got through the sponsorship in a podcast. NPR worked with 30 companies across the audio and podcast industries to launch RAD, including Acast, AdsWizz, Art19 and Panoply. Publishers, including The New York Times, ESPN, iHeartMedia and Wondery, have expressed their support. Conspicuously missing from that list, however? Apple, which still captures more than half of all podcast listening. Read the blog post. [And read more about RAD in AdExchanger.]