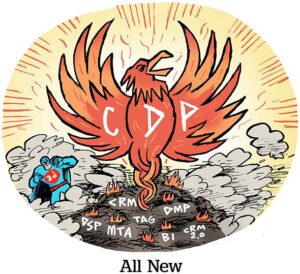 Begun, The CDP Wars Have

The CDP startup mParticle raised $150 million, bringing its total fundraising to $272 million. mParticle is valued at $800 million, Business Insider reports. The valuation is a smidge short of the billion-dollar club – an arbitrary benchmark, though the CDPs Amperity, Tealium and Segment all recently reached unicorn status. mParticle is known for its blue-chip accounts, with many consumer-facing brands or mobile-first companies with heavy data collection: Burger King, Chick-fil-A, Chewy, jetBlue, Airbnb, Spotify and Venmo among them. The CDP market is cutthroat, even among the mere nine- and 10-digit valuation companies, such as mParticle, Tealium and Amperity. But now CDPs must contend with Twilio, the 60-billion dollar odd company that acquired Segment, and with true world-eaters like Salesforce, Oracle and Adobe, each tipping the scale at a quarter trillion. Those marketing cloud CDPs have fairly basic triggered email products or connections between CRM data to marketing. But the enterprise giants have deep roots with global brands, and a CDP is a natural extension of their suite. Startups must press for testing among enterprise brands to gain a footing alongside a marketing cloud or win with digital-first companies that aren’t hooked into the traditional CRM, cloud and server system.

It’s probably too early to say definitively, but it’s interesting to note that news and digital media publishers may have been the beneficiaries of Facebook’s wide outage on Monday. Andraz Tori, Outbrain’s head of recommendations and data science, tweeted a quick week-over-week graph of open web traffic during the time when Facebook and its stable of apps were down. Starting at about 7 a.m. ET, when Facebook service dropped, traffic jumped by almost 50% from the baseline. It will be interesting to see how that normalizes since Facebook’s return – perhaps some users had forgotten a preference for good ol’ fashioned web browsing – or how the effect played out by category, such as news vs. entertainment sites. Head of Instagram Adam Mosseri tweeted that the outage “does feel like a snow day.” Except, unlike snow days, users can go Facebook-free any day they choose.

All eyes are on the European Union General Court, which is considering Google’s appeal of a case decided against Google Android, which was fined for anticompetitive practices by embedding Google Search as the default for Android devices. It is the first case since Microsoft was brought to court in 2007 to test Article 102 TFEU, the EU law for digital platforms bundling services, writes Dimitrios Katsifis, senior associate at the competition law firm Geradin Partners, at The Platform Law Blog. Not for the first time, Google justified itself in this case by portraying itself as a “neutral operator that carefully balances the interests of various stakeholders to secure the long-term integrity of the ecosystem.” That was part of Google’s advocacy in a suit before the Australian competition commission and with US regulators. This is the first time the argument will be tried in a top EU court.

How agencies can retain clients when a new CMO comes in. [Adweek]