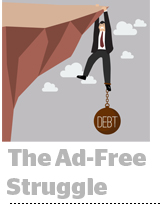 Verizon Media Group, the company formerly known as Oath, is shrinking as the telco shifts its focus and most of its resources to 5G. The media group, which is made up of Verizon’s acquisition and merger of AOL and Yahoo, saw revenues decline 7.2% in Q1 to $1.8 billion. To be fair, that’s still a sizeable chunk of change, but Verizon Media Group’s performance is lackluster given the hype when it burst onto the digital ad market in 2017. “Declines in desktop advertising continue to more than offset growth in mobile and native,” said Verizon chief financial officer Matthew Ellis. But Verizon Media Group did manage to integrate its DSP and SSP into a consolidated stack. The telco also lost 44,000 paid phone subscribers and 53,000 FiOS subscribers last quarter as a result of cord cutting and competition. Read the release.

Netflix is raising $2 billion in debt for purposes that “may include content acquisitions, production and development, capital expenditures, investments, working capital and potential acquisitions and strategic transactions.” Read the release. It’s only been half a year since the company’s last debt financing round, which was also $2 billion. But the streaming landscape has changed in those six months. Disney unveiled its $6.99 per month subscription service, Disney+, and studios like WarnerMedia and NBCUniversal are also pulling content from Netflix for their own offerings. Those deep-pocketed competitors also increase Netflix’s marketing costs by churning subscribers and bidding up the same audiences. Netflix said 2019 should see the peak of its cash burn, CNBC reports. If and when Netflix begins to experiment with ads or sponsorship options, it may be a concession to the company’s debt.