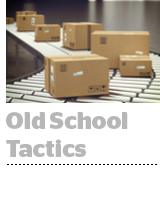 Thinking Inside The Box

Amazon is testing a program to deliver free product samples on behalf of brands like Maybelline and Folgers, Axios reports. With its ecommerce data, Amazon says the old-school free sample tactic can lead to “a higher likelihood of conversion than display ads,” according to a job posting. Amazon is already shipping items to millions of people, often in packages that can accommodate additional product without increasing costs. Without increasing Amazon’s costs, at least. Brands pay for the promotion. More. The move speaks to Amazon’s opportunity to boost trade marketing revenue, currently about $3 billion of Amazon’s $9 billion annual ad business, according to Pivotal Research. As CPGs and grocery brands embrace ecommerce, the marketing dollars traditionally spent with retailers on things like in-store signage, free samples and coupon circulars are finding a new home with Amazon.

Google product management director Jonathan Bellack, a DoubleClick vet who led publisher ad platforms, is moving up and over to Jigsaw, an Alphabet subsidiary focused on privacy and cybersecurity products. “I loved my almost 15 years in ad tech with DoubleClick and Google,” Bellack wrote in a Facebook post. “But given the state of the world today, a chance to take a role 100% dedicated to trying to make a positive difference felt like the right thing to do.” LinkedIn.

Are You Not Entertained?

Entertainment is shaping up to be the next big thing for tech giants. YouTube’s value to Google is clear enough, and Amazon and Alibaba have demonstrated the symbiotic relationship between online shopping and entertainment. AT&T is making advertising and its new Hollywood empire co-equal branches of the business. And Sony CEO Kenichiro Yoshida, who took over last April, surprised some observers at CES by doubling down on the company’s entertainment properties when he’s expected to jettison non-core businesses, The New York Times reports. That these companies can connect entertainment to users on smart TVs, game consoles and other devices increases the sum of those parts. More.