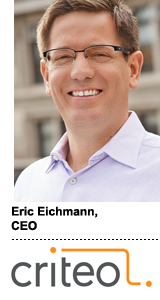 Criteo welcomed Twitter’s revelation last week that it would stop investing in its retargeting platform TellApart due to direct-response headwinds.

Criteo’s CEO said these changes could help its own business.

“TellApart was a strong competitor for us in the US, so it was good news for us that they’re winding down that business, and [it] opens the possibility for us to work with those advertisers,” Criteo CEO Eric Eichmann said Wednesday during the company’s Q1 earnings call.

Twitter historically competed with TellApart on the demand side, which sometimes created friction when accessing Twitter’s supply.

“Going forward, we’ll potentially be in a better position to work with Twitter,” Eichmann told AdExchanger.

“To me, what happened with TellApart proves it’s difficult to compete in this space,” he said. “We ran 170 tests in Q1 and added 30 variables to our engine. It’s hard to compete [in retargeting], and it’s a little bit of a winner-takes-all for whoever generates performance.”

The HookLogic acquisition is paying off overall, Eichmann said.

“Our goal is to provide the non-Amazon network for brands,” he added. “There’s been quite a bit of discussion around Amazon’s media advertising services, some of which are competitive with Criteo Sponsored Products, but we’ve seen more opportunity to help retailers reach scale. Amazon is a strong force, but it’s also led to more retailers working with us as a result.”

A Move Into Video

The launch of Sponsored Products and other newer formats, such as video, are part of a push to expand beyond Criteo’s performance advertising roots and diversify its product capabilities.

Although Criteo has been virtually absent from video, it is beta testing video with a few large US clients while focusing on unlocking quality video inventory, Eichmann said.

Since Criteo is so late to the video race, it doesn’t plan on competing with traditional video DSPs on formats like standard pre-roll. Instead, Criteo’s emphasis on ecommerce ads and product personalization will take center stage in its video product.

A key challenge was creating personalized video embedded with a set of product recommendations. Criteo said click-through rates and conversions were good in early tests, but the tests only ran against a very limited volume of video inventory, and Criteo has yet to scale.

“The jury is still out because we need to test if this still works when we throw a lot of volume at it,” Eichmann said. “We’re working over the next two quarters to see if our video solution scales. We see this as an extension of our core business, and if we can make it work, video carries more benefits from a brand perspective.”