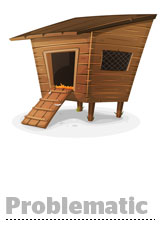 There’s growing disquiet among ad agencies about exposure to the consultants who audit their media practices, according to Ad Age. Companies like Accenture and Deloitte argue their media auditing and digital agency groups are separate and the information is firewalled. But still: “This is potentially the most egregious example of someone grading their own homework,” says MediaLink CEO Michael Kassan. “You can't have a fox in the henhouse.” More. On the other hand, agency audits aren’t about to go away. If there’s no alternative, is there really a problem?

Publishers know there’s money to be made on Facebook Live. The problem is, it costs a lot of money to make live video. Digiday rounds up a list of hacks publishers are using to game Facebook’s video algorithm and find platform revenue. Some publishers, like the Daily Dot and Unilad, pre-record video and pretend they’re filmed live. Others, like BuzzFeed and Mic, run polls or content countdown clocks. Other hacks include posting animated GIFs, reposting video from other pubs and stringing together still photos with text and motion to cut down production time. More.

Instagram Marquee and Twitter First View are ad products that let brands take over the first ad view for a user on a given day. They’re pricier, but provide the undiluted mass reach that’s popular for single-day blitzes like movie releases and consumer electronic launches. And now “Snapchat has quietly been pitching advertisers on a way to reach everyone in the US who views a Story on a given day,” reports Tim Peterson at Marketing Land. Dubbed Snap Ads Max Reach, the product is available only in the US and through Snapchat’s sales team. More.

Google AdSense updated its mobile ad policies to allow 300x250 ads to run above the fold on mobile sites, the company said in a blog post. Previously, users could only see these medium-sized banner ads while scrolling down a page. Google’s decision to allow them to render at the top of a page could push publisher content further down the screen. According to TechCrunch, the policy change might be due to the growing popularity of smartphones with larger screens. Revenue is another likely factor, as Google has said these units command higher CPMs when placed higher up on the page. More.

IPG Mediabrands CEO Henry Tajer is out, reports Suzanne Vranica of The Wall Street Journal. Chairman Philippe Krakowsky will oversee Mediabrands. Tajer, formerly CEO of IPG Mediabrands Australia, was brought on in 2015 as global CEO. Under Tajer’s leadership, Mediabrands won major accounts like Coca Cola and Johnson & Johnson but faced some tough losses as well, like MillerCoors and Hyundai/Kia. The Journal doesn’t say why he left, but it will likely cause ripple effects across the group as Tajer brought on many of his executives from Australia when he took on the CEO role. More.