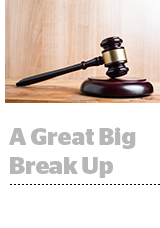 Democrats are poised to call for a breakup of big tech, according to The Wall Street Journal. Following a 15-month investigation into Google, Apple, Amazon and Facebook, the House Antitrust Subcommittee will soon drop a report that committee chair David Cicilline, D-RI, indicates will recommend separating the tech platforms from its other lines of business. No word on the specifics yet, but the Journal speculates that proposed legislation could include banning Amazon from competing with sellers on its platform, or preventing Google from owning services that consumers might search for on its search engine. Besides a breakup, other options could include increasing the budgets of antitrust enforcement agencies or demanding more interoperability across different platforms. But whatever changes the committee proposes, expect a big fight from the tech giants.

Marketers who typically see a sales cycle of over a week aren’t gonna like this: Facebook is ending its default 28-day attribution window as of Oct. 12. The longest window will now be only seven days. Facebook is citing “Digital privacy initiatives affecting multiple browsers” for this change, apparently trying to get out ahead of Chrome’s deprecation of third-party cookies, which will impact attribution. The good news (I guess?) is that Facebook’s Ads API will still, temporarily, provide 28-day attribution windows, until the browser changes are officially in effect. Facebook concedes that marketers may see fewer reported conversions, this change will induce “a more sustainable measurement strategy” that will hold up to future browser policy changes. In its official post outlining the change, Facebook recommended some prep work to ensure marketers are prepared.

News flash: Apparently news doesn’t have a brand safety problem, at least from the consumer perspective. According to a new study from the IAB and Magid Research, advertising in news is brand safe, increases trust and drives consumer action. The research, which surveyed just over 2,000 US consumers, found that for 84% of people, trust in a brand remains neutral – or actually increases by as much as six percentage points, depending on the vertical – as a result of advertising in new content. Just 16% of consumers said that brand adjacency in news content makes them trust brands less, and nearly half (47%) said that advertising in news increases their positive perceptions of a brand’s attributes. So … maybe it’s time to stop keyword blocking COVID-19 and BLM now? MediaPost has more.

Samsung is taking a deeper plunge into ad selling, with the launch of a self-serve ad platform. “Samsung is building an ad business that serves ads to connected TV apps, mobile phones and computers,” AdAge reports. Samsung has been gradually expanding its ad sales capabilities. In May, for instance, it made its CTV inventory available programmatically for the first time, via SpotX, availing two types of inventory: The first comes from a free content service embedded in Samsung smart TVs called Samsung TV Plus. The second comes from a content network, which includes apps where Samsung has the rights to sell a portion of the inventory. Buying through Samsung Ads also lets clients access unique first-party data. While other TV manufacturers such as VIZIO license out their data, Samsung keeps its close to the chest. No word on whether Samsung’s new self-serve capability is built from scratch, or stems from its 2016 acquisition of the DSP AdGear.