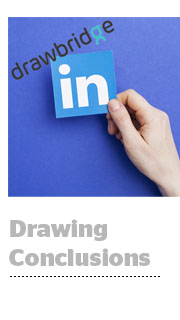 On the surface, LinkedIn’s plan to acquire cross-device data company Drawbridge may seem like a head scratcher. What does a B2B social network want with a probabilistic cross-device vendor?

The deal creates potential for LinkedIn’s marketing products that go beyond Drawbridge’s existing technology assets. If LinkedIn wanted access to an identity graph, it could have just bought an enterprise license – not an entire company.

The Drawbridge talent was clearly a major attraction.

The job market for data scientists and machine learning engineers is extremely competitive. Acquiring Drawbridge gives LinkedIn a prebuilt team of cross-device and identity experts in one fell swoop, said Gareth Davies, founder and former CEO of cross-device identity company Adbrain (acquired by The Trade Desk in 2017) and co-founder of Truth{set}, a data validation startup that’s still in stealth mode.

“Drawbridge has a good density of engineers,” Davies said. “And now they can solve immediate problems for LinkedIn and help LinkedIn solve specific problems in the future.”

LinkedIn is tight-lipped about the acquisition, other than to say it will help accelerate its Marketing Solutions platform in terms of reach, cross-device attribution and targeting, particularly to support LinkedIn’s Audience Network solution.

But what else could this unlikely duo do together?

LinkedIn parent company Microsoft backed out of the marketing tech and ad tech business long ago, and LinkedIn mainly operates separately from Microsoft, but cross-device technology could build an interesting bridge between the two.

For example, Davies said, Microsoft is making big investments in the cloud and moving more into CRM. There’s nothing stopping Microsoft from offering B2B marketers who store their data in its cloud the ability to use LinkedIn as an activation layer for B2B marketing.

Think of it as a sweetener. CRM files are by definition limited to known customers.

“They could pipe in their own first-party data, onboard it, match it and activate it with LinkedIn,” Davies said. “The Drawbridge solution in that case could be similar to the way in which LiveRamp works, using third parties to extend the reach of an addressable audience.”

Millions of people log in to LinkedIn – and look at ads – on lots of different devices on a daily basis, which is a springboard as LinkedIn builds “one of the best B2B data truth sets in the industry,” said Eric Schmitt, a research director and analyst at Gartner.

The next logical step – and “a natural moneymaker,” Schmitt said – is for LinkedIn to take advantage of its audience of professionals to sell advertising beyond its own site and apps.

Creating cross-device connections based on identity and behavior in order to support an ads business is a lot harder than it sounds, however, even for a social network with lots of logged-in data, said Joe Stanhope, a VP and principal analyst at Forrester. Drawbridge can obviously help make those linkages.

But there’s also an opportunity to get smarter about contextual relevance, Davies said.

Knowing that an IT manager or a CTO is in the market to purchase an enterprise software solution is only half the battle. If LinkedIn can understand when someone is at home, at the office or on the move, advertisers have a better chance of targeting that person at the most receptive moment and measuring the engagement afterwards.

“Their data set can help B2B brands find decision-makers and influencers, and even help B2B brands layer in professional data, like income and life stage, alongside their location data to target affluent audiences,” said Brian Katz, SVP of product and data strategy at Magid.

And the capacity to do cross-device matching “will amplify LinkedIn’s ability to drive audience analysis,” said Mark Fruehan, EVP of Velocity Marketplace at Verve.

“This is going to open the door to deeper insights – and, of course, to monetizing those insights – based on a multiscreen approach,” Fruehan said. “From smartphones to laptops to whatever else turns out to be the preferred LinkedIn user experience, this is part of LinkedIn’s future when it comes to competing for advertisers.”

But what did the future hold for Drawbridge as an independent company? LinkedIn bought Drawbridge for its tech and its talent, and Drawbridge was perhaps more than ready to find a safe harbor after an exhausting couple of years when it withdrew from Europe before GDPR last year and sold its media business to location data platform Gimbal.

“Drawbridge probably experienced a leveling off in their overall momentum, and GDPR was not kind to them,” Stanhope said. “Then again, they’re not unique in that.”

But Drawbridge was unique as the last of the leading cross-device identity companies to get acquired.

And it was time, considering the “huge secular headwinds” blowing toward anyone that’s in the business of inferring identity from bidstream or clickstream data, Davies said.

“Drawbridge was facing a world in which it’s becoming less about third-party data and more about first-party data to build a graph,” he said. “It makes a lot of sense to find a home with a first-party data owner and work on those problems in house – a logical extension of what happens when the rest of your data supply gets cut off.”