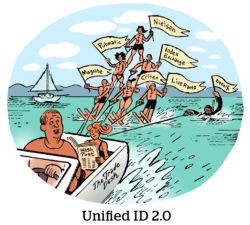 The CNIL, the French data protection authority, fined Google $170 million and Facebook $68 million because they don’t make it as easy to reject cookies as it is to accept them. It takes multiple clicks to decline cookies – and just one to accept them.

“Since, on the internet, the user expects to be able to quickly consult a website, the fact that they cannot refuse the cookies as easily as they can accept them influences their choice in favor of consent,” the CNIL wrote.

But this isn’t Google’s first rodeo in France.

The CNIL tagged Google with a $57 million fine in January 2019 because its cookie consent request provided insufficient information about how data was to be used across sites and purposes. (So much for being able to quickly consult a website.)

The CNIL’s ruling this week requires Google and Facebook to adjust their cookie consent practices, although only in France – not the rest of the EU.

For now, privacy protections are balkanized due to regional rules, and not just in Europe. China, California, Colorado and Virginia are just a few of the regions that have their own regs. Maybe someday there will be a global privacy law … but don’t hold your breath.

The pursuit of a collaborative industry advertising identifier – a unified ID, if you will – has perhaps exposed the futility of wrangling ad tech stakeholders (advertisers, ad tech, data companies and publishers) behind a single solution.

Case in point, the Advertising ID Consortium, which was helmed by LiveRamp and, originally, AppNexus, and later fell into disrepair after constituents ditched the concept.

UID2 has also been stymied in Europe, where no company or industry group, including the IAB Tech Lab, wants to be named administrator – and have to deal with the inevitable GDPR examination and PR backlash. AdExchanger had that story.

Scale and total addressable audience are still important metrics, but subscriptions have become the ultimate prize for digital media and broadcast companies.

The Information found that media companies with subscribers are valued much higher than their free, completely ad-based counterparts. The Athletic and Politico, both subscription-based news outlets, were recently acquired for $550 million and a cool $1 billion, respectively. Wall Street appears to agree that predictable subscription revenue makes companies worth more.

Meanwhile, subscriptionless digital media companies have seen their valuations plummet from their venture-backed heydays. We all saw what happened with BuzzFeed. Similar companies hoping to go public via SPAC, like Vice and Bustle, are now thinking twice.

Does that mean subscriptions are more important than high-quality content? Well, no. Just look at TV.

GroupM research finds an increase in the percentage of Americans concerned about how companies are utilizing their personal digital data. [MediaPost]

A lawsuit claims that Facebook’s parent company, Meta, was used by attackers to communicate and therefore shares in the blame for the 2020 killing of a federal guard. [NYT]