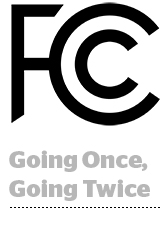 Later this year the FCC will hold two wireless-airwave auctions – the mechanism for telcos to license broadband spectrum from the government – and the Sept. 18 deadline for applicants is heating up the already boiling media M&A market. Companies like AT&T, Verizon and Comcast will participate. In the past these players have hurried to make acquisitions before the deadline, when the FCC enforces a quiet period so participating companies can’t coordinate, The Wall Street Journal reports. Deals can technically continue as long as spectrum bids aren’t discussed, but companies won’t risk complicating their FCC dealings, especially considering these licenses are for particularly important millimeter-wave spectrum channels, “which (are) expected to provide broadband-quality service over airwaves once considered useless for wireless service.” More.

TripAdvisor has increased its TV ad spend to expand into new markets, the company said in its Q2 earnings call Thursday. At the beginning of the year, TripAdvisor said it would spend $100 million on a TV campaign focused on “hotel price comparison.” Execs say the company is following through on those plans. “The decision to restart [TV spending] last year and increase our spend this year were clearly the right ones,” TripAdvisor CEO Stephen Kaufer told investors. “And I think our financials show that and we’re educating and building the brand.” Still, the company’s hotel business revenue dropped 4% to $313M while non-hotel revenue increased 22% to $120M.

Sinclair Broadcast and Tribune Media were hit with antitrust suits from at least three advertisers for conspiring to fix prices on TV commercials, MediaPost reports. The broadcasters’ ad sales teams shared “competitively sensitive information and data with each other, which they used to raise advertising prices to levels higher than they otherwise would have been,” alleged the advertisers in a suit filed Thursday. “Faced with the reality that they would not be able to maintain and increase their profits through mergers and acquisitions alone and staring down increasing competition for advertising dollars from digital platforms like Facebook and Google, which remain crucial to broadcast television owners’ financial success, Defendants and their co-conspirators sought to increase profits by raising television advertising prices through price-fixing.” More.

“Fortnite,” the videogame smash, is taking an unprecedented approach to Android adoption and foregoing the Google Play Store. Developer Epic Games is betting on “Fortnite’s” popularity to drive downloads via an Android install program on its mobile site – thus sidestepping Google’s 30% cut of in-app sales. The industry has some security concerns, The Verge reports, since unlicensed downloads have been a gateway for malware in the past. But Epic says the risk is under control. “Mobile operating systems increasingly provide robust, permissions-based security, enabling users to choose what each app is allowed to do: save files; access the microphone; access your contacts,” said Epic CEO Tim Sweeney in an announcement. “In our view, this is the way all computer and smartphone platforms should provide security, rather than entrusting one monopoly app store as the arbiter of what software users are allowed to obtain.” More.