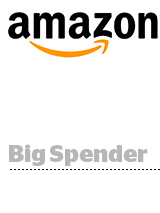 Amazon may be raking in billions from its ad business, but it’s also spending a ton on programmatic advertising. The ecommerce giant was the biggest programmatic spender during the first quarter of this year, according to a report from MediaRadar. Amazon spent 150% more than Microsoft, the second-largest programmatic advertiser, and accounted for 10% of spend by the largest 50 advertisers. Other top programmatic spenders in the quarter include Wayfair, TaxAct, Charles Schwab, Weight Watchers, Sprint, Coors Light, Geico and Dell, writes Marketing Dive. More.

Google’s acquisition of the influencer marketing platform FameBit almost two years ago is starting to pay off. On Alphabet’s Q2 earnings call last month, CEO Sundar Pichai credited FameBit for doubling creators’ revenue on YouTube – of which the platform gets a 10% cut. Google was slow to broker influencer deals, usually the territory of talent firms and PR or social agencies, but now it’s pitching its influencer business as part of large ad packages, reports Mike Shields for Business Insider. Influencer campaign spenders are eager for YouTube’s distribution and ability to measure video impact across other properties. "One of the most exciting pieces is the measurement side," said Beau Avril, a YouTube vet and FameBit’s global head of business operations. "We can show brands what happens in search when creators talk about their products." More.

It’s been a tough year for MDC Partners. The holding company reported Q2 earnings Thursday with a 2.8% YoY dip in revenue to roughly $380 million. Organic growth was down 1.7% for the quarter and 0.5% for the first half of the year. MDC has been hit hard by clients cutting back on agency costs, especially CPGs, CEO Scott Kauffman said on the earnings call. In July, MDC cut its corporate staff by 15% to save $4 million in annualized staff costs. MDC will continue to evaluate its portfolio for cost savings throughout the year but is maintaining its guidance for 1% to 3% organic growth for 2018. “We continue to see great demand for our agencies,” Kauffman said. “There’s a lot of activity right now. You hear a lot of CMOs talking openly about shifting needs.”

Correction: This story previously said MDC Partners will save $40 million in annualized staff costs in 2018. The correct number is $4 million.