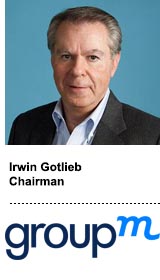 Although GroupM has invested aggressively in programmatic and data-driven marketing technology, Chairman Irwin Gotlieb still adheres to the importance of top funnel marketing.

“I believe strongly in a marketing funnel, and that broad targeting will continue to remain an essential part of marketing,” he told AdExchanger. “If I focus my effort on picking the lowest hanging fruit and stop watering the tree, the tree would die. That’s what happens when brands over-target.”

And short-term focus on cost and ROI are troublesome trends Gotlieb has seen before.

“As an industry, we’re not good at keeping institutional knowledge,” he said. “If you’re going to build a brand, you have to take into account long-term effect, short term-effect and everything in-between.”

Gotlieb spoke with AdExchanger about the state of the marketing landscape and the future of GroupM under a transforming WPP.

AdExchanger: Can you stop clients from applying short-term thinking to their marketing budgets, or do you just have to wait until the cycle wears out?

IRWIN GOTLIEB: Companies under pressure do what they have to do to see another day or quarterly report. Most often, they do that by narrowing the target, or by trading highly effective media for cheaper, less effective media. That doesn’t yield good outcomes for the long-term health of the company.

We do our best to convince clients they shouldn’t do certain things. If they have a figurative gun to their head and there is no choice, we will execute what we are told. But it is our responsibility to push back.

It’s also risky when millennials and young people don’t value brands the way previous generations have, and you have consolidation in distribution. Some of those distribution points aren’t particularly anxious to protect legacy brands.

The question is, which is the chicken and which is the egg? Do we have the current situation because over the last decade we’ve invested insufficiently in building top funnel awareness [for] this generation? I think brands have underinvested in broad awareness marketing and have overinvested in more narrow targeting.

What are your thoughts on the evolution of programmatic?

Programmatic kicks in when the transaction is so small, humans can’t manage the volume. As we move from purchasing pages in magazines, billboards and 30-second spots on television to impressions, that level of decisioning can’t be done by humans. That all falls broadly under programmatic.

Marketing is about simultaneously working on every level of the marketing funnel. In the last 15 years, the granularity of data available allows us to activate against each level of the funnel. That doesn’t mean I stop doing top funnel work. If you miss any of those steps, you do so at your own peril.

What’s the future of ad-supported TV as consumers continue to cut the cord?

People are moving from linear to nonlinear content, and every bit of viewing that moves [that way] impacts the economics of television and discovery.

It’s harder to launch programs and build loyalty on third-party platforms. You have to buy your messaging. Your risk goes up with the cost of launch, and the cost of failure increases dramatically without necessarily impacting the value of success. If our content creators have more risk creating content, maybe they’ll take fewer risks. There will be less content and less places to advertise. The flip side is, you know who watches what. In that context, you can scale an opportunity.

I worry that subscriber revenue is replacing advertising revenue. I worry about ensuring that the supply of media remains high, and these trends are not positive in that respect. The good news is this is gradual. It’s accelerated a little in the last few years, but it will play out over time.

How long until addressable TV is mainstream?

It’s going to be a while, but not because of technology constraints.

Addressable TV does the middle and bottom of the marketing funnel best. But if I first saw an ad for Mercedes was when I was 40, it would be too late. Someone needed to create aspiration in me when I was 12. If a young mother wasn’t aware of Pampers and Huggies as a little girl, she wouldn’t trust it to put it on her baby. Targeting has a role, but broad-based media has a role.

What factors do you consider when you consolidate agencies?

It’s a matter of differentiation and specialization. At some point, you don’t need more scale as it relates to the number of agencies. Given AI, systemic solutions and algorithmic approaches, some human functions today will get replaced by machines. It’s going to be a combination of the best technology and the best talent applying it, but there will probably be fewer heads and more servers.

How do you attract engineers and data scientists to media agencies? Is there a perception problem?

We have to change our image and we have to change the kind of talent we attract. The business is pivoting. A lot of what we do today, we will do systemically. How do you use people to do tasks that people are best suited for, and machines to do everything else?

More functions we look at are not suitable for human implementation. We can’t afford to have humans do real-time bidding. They can’t do it fast enough. But more of our stuff is moving [that way].

Today, you buy a 30-second spot. Five years from now, you may be buying it impression-by-impression. That’s a different game. You have to anticipate it and you don’t want to be the last one doing it.

Is it possible for agencies to be as streamlined as you’d like, or is waste inevitable?

I don’t know that there’s waste. There’s an opportunity for agencies to be more practitioner-focused. One of the challenges we have is clients need a lot of account handling, which isn’t the most efficient. The people who do the work aren’t always interfacing with clients.

Media agencies have always had very tight overheads because we have to pay for research, data and technology. Our Nielsen costs are in the tens of millions of dollars. That’s considered overhead, and you can’t do away with it.

As WPP transforms, what happens to GroupM? Will there be further consolidation either among your agencies or with other WPP entities?

Media was always contemplated as a scale-sensitive area, as was data. We had a parent over the agencies so scale could be applied intelligently. I think that structure just gets broader and broader.

The natural synergy has always been between Kantar and GroupM, and that’s getting closer. There’s more integration and reliance on each other.