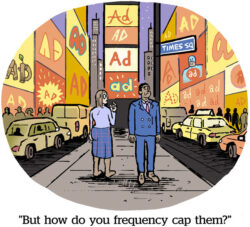 AppLovin is a gaming content fortress (in the parlance of Eric Seufert). It published nine of the top 200 highest-grossing US mobile games last quarter and topped global downloads.

The logical next step is to dominate a new category – and AppLovin plans to do just that.

AppLovin is hiring for a new “Wellness” app. (H/t to mobile consultant Josh Burns for the spot, via a tweet thread.)

The wellness category is dominated by Calm and Headspace, but it’s been years without a strong third player, and the time could be ripe for a challenger. Especially one with AppLovin’s addressable audience and marketing chops.

“The size of AppLovin’s audience locked behind the walls of its gaming content fortress … may actually allow it to significantly grow the entire category for wellness apps, not just take market share from incumbents,” Burns tweeted.

AppLovin also has popular ASMR games – which are meant to trigger a feeling of relaxation with satisfying sounds and slicing actions – and overlap somewhat with meditation apps.

But the move is also an important exercise in revenue diversification. Today, AppLovin relies on ads and in-app payments, but wellness and meditation apps are primarily subscription-based.

Investors are crazy for subscription metrics right now, and AppLovin IPO’d last year, so it’s got access to capital.

“With the sheer number of CTV platforms out there, frequency management can be tedious and, if not done right, can lead to significant waste in ad spend,” Marvin Renaud, Google’s director of global video solutions, told AdExchanger in an email.

Better frequency capping means DV360 can promise better reach. If an advertiser with a cap of five serves someone 10 ads, it’s missing an additional user at zero cost.

But big CTV campaigns span the ecosystem, often via multiple agencies and ad tech vendors. Broadcasters cross-sell into Roku, Fire TV and YouTube TV. The platforms advertise against parcels of inventory controlled through distribution deals. The Trade Desk is firing off CTV ads based on a separate identity framework.

These campaigns can’t be rationalized. (That’s the whole point of a walled garden.)

If each promises a five-ad frequency cap, the viewer still may drown under the same ad. Related in AdExchanger: “Top 3 Streaming Pet Peeves – And Why They Really Happen.”

And because one Google news item is never enough: Google is adjusting its Web & App Activity admin controls for Google Workspace business users. Come April, the controls will be divided into two settings: one called “Search History” and another still called “Web & App Activity.”

It’s worth noting that the split in the Workspace data console neatly carves out the Google properties where data is collected for the Google advertising ID.

Another cynical benefit for Google is that administrators can no longer block many users with one click. Rather, individuals must opt out of tracking. And, naturally, if Web & App Activity tracking was previously disabled by an administrator, it will revert to being enabled until disabled again by the individual user. The patterns are dark.

Netflix is hiring entertainment magazine writers to build a “fandom engine” to market its shows. [Insider]

Why Bush’s next ad (canned good company, not the former president) will be made by a TikTok-based social creator. [Digiday]

Credit Suisse, Essity and Heineken have joined the list of global marketers committing to the WFA Planet Pledge, a self-imposed commitment to use their marketing budgets to promote sustainability. [MediaPost]