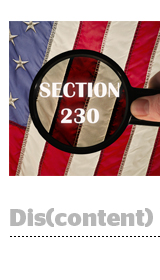 Late last week, two House Democrats introduced a bill that would require social media platforms to share and implement content moderation policies and would revise Section 230 by allowing the Federal Trade Commission to bring enforcement actions against tech companies that fail to adhere to those policies, MediaPost reports. The bill, called the Online Consumer Protection Act, is being co-sponsored by Reps. Jan Schakowsky (D-Illinois) and Kathy Castor (D-Florida). It would also empower consumers to bring their own private lawsuits. As a refresher, Section 230 of the Communications Decency Act is what shields web companies from legal liability for content created by third parties, including advertisers. The Schakowsky-Castor bill is only one of several recent proposals to call for revisions to Section 230. One thing Democrat and Republican lawmakers can agree on is that Section 230 needs a facelift – albeit it for very different reasons. Republicans argue that social platforms suppress too much speech, while most Democrats believe tech companies don’t do enough filtering.

And here’s something else upon which bipartisan folks see eye to eye: they think Facebook’s intention to launch a version of Instagram for children under the age of 13 is a bad idea. On Monday, a coalition of 44 state attorneys general from both parties sent a letter to Mark Zuckerberg – his inbox is overflowing with love notes from regulators these days – urging him to abandon plans for Instagram Kids. In the letter, the AGs expressed concerns over the harmful effects that social media can have on the physical, emotional and mental wellbeing of children. They also pointed to the use of Instagram by predators and Facebook’s less-than-stellar record protecting the welfare of children on its platforms. In one recent instance, Instagram’s algorithm mistakenly promoted diet content to users with eating disorders. “These alarming failures cast doubt on Facebook’s ability to protect children on their proposed Instagram and comply with relevant privacy laws, such as the Children’s Online Privacy Protection Act,” the AGs wrote. Read the letter.

And the hits just keep on coming. According to a study released on Monday by GLAAD, the LGBTQ adovacy organization, all of the leading social media sites, including Facebook, Instagram, Twitter, TikTok and YouTube, are “categorically unsafe across the board” for LGBTQ people. GLAAD president and CEO Sarah Kate Ellis tells Axios that although all of the sites and services present themselves as LGBTQ-friendly, they nonetheless allow for LGBTQ people to be harassed on their platforms on a daily basis, in addition to allowing harmful misinformation to spread unchecked. But most shocking, Ellis said, is that “at the end of the day, these companies have the tools to stop it.” There are some positive changes starting to happen, though. GLAAD, for example, gave props to Twitter for rules against dehumanization, including intentionally using the wrong gender to refer to transgender people. GLAAD says it hopes to work with social media platforms in the next year to come up with more remedies.

Google, which reaches more than half a billion people in India, has rolled out a range of updates to its Search, Maps, YouTube and Google Pay services in the country to display and promote authoritative and credible information about the coronavirus. [TechCrunch]

Australia’s antitrust watchdog has taken what it calls the “unusual” step of seeking to assist in Epic’s lawsuit against Apple. [IT Pro]

Facebook is launching services to help influencers better monetise their followings. But in the long term, these changes may not best serve creators or brands. [Business of Fashion]