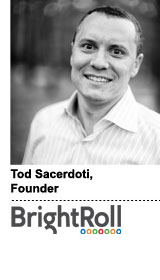 Yahoo’s new parent, Oath, will have to make do without one of the acquired company’s key ad platform executives.

BrightRoll CEO Tod Sacerdoti is exiting the video demand-side platform and exchange he founded in 2006, according to a source with knowledge of the company. Yahoo bought BrightRoll for $640 million in 2014.

An unconfirmed number of sales and platform partner leads focused on BrightRoll’s DSP and exchange are also out, AdExchanger has learned.

No big surprise here, considering the recent closing of the long-awaited Verizon-AOL-Yahoo merger and subsequent coming-out party for Oath in Cannes. A recent reduction in headcount at Oath impacted 2,100 Yahoo and AOL employees upon completion of the merger.

It’s not clear what connection there might be, if any, between Sacerdoti’s exit and the layoffs.

Oath has neither confirmed nor denied Sacerdoti’s departure.

When Oath CEO Tim Armstrong laid out his new leadership team in a memo to the combined company in April, most of Yahoo’s top brass was notably absent from the list, including CEO Marissa Mayer, CRO Lisa Utzschneider, CFO Ken Goldman and Enrique Munoz Torres, Yahoo’s SVP of advertising and search.

Sacerdoti, who most recently served as VP of display and video ad products for Yahoo, was somewhat of a “star” founder in the video ad tech space.

A longtime proponent of programmatic video, Sacerdoti, also an investor, was a key part of Yahoo’s response team when claims of widespread fraud in Yahoo’s video exchange and alleged “ineptitudes” in its larger sales org hit the company in 2016.

Although BrightRoll was rumored to be Oath’s video platform of choice, tech-wise, AOL didn’t come empty-handed to Verizon. AOL has its own video ad tech by way of its Adap.tv and Vidible acquisitions.

The plan now is to combine comparable assets from BrightRoll, AOL ONE and mobile exchanges Flurry and Millennial Media into a single stack with a new name, said Oath CMO Allie Kline on Monday in Cannes.

But as one AdExchanger source earlier speculated, it’s likely that AOL “will migrate BrightRoll Exchange’s best SSP customers to Adap.tv and shutter BRX’s buy side entirely.”

And if that happens, BrightRoll would be consigned to history, Martin Kihn, a research VP at Gartner, also predicted.

“I’m sure there’s a lot of potential overlap,” he had noted. “And [that’s] a technical nightmare to [overcome].”