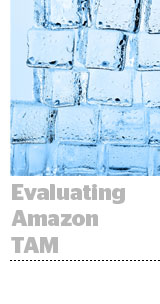 Amazon’s Transparent Ad Marketplace (TAM) is the new kid on the block.

But like with most of its endeavors, Amazon is readying itself to disrupt the existing paradigm.

But for Amazon’s server-side header bidding wrapper to work, publishers and exchanges need to sign up. Since the product was announced in December, many top-tier publishers have put their names down to test Amazon’s TAM. Several exchanges are on board too, including Facebook Audience Network, Rubicon Project and PubMatic.

Every exchange would prefer to have its tag right on the page, as they do in header bidding, because it improves the match rate.

This means that, for a server-side solution to work, exchanges can’t see a big decrease in the number of users that they’re able to identify for DSPs.

“Not only are the match rates high, but the process hasn’t been like putting a brick against your head,” said Rubicon Project CTO Tom Kershaw.

In other words, it’s easy.

Kershaw said match rates are “well north of 70%,” and only slightly lower than client-side solutions.

PubMatic, which also just announced its integration into TAM, said it was too soon to draw conclusions about match rates, but noted that the rates are good – for a server-side solution.

A big bonus for PubMatic is that Amazon is offering up intros to publishers it doesn’t work with that use TAM.

“One of the attractive things is that they have been referring publishers to us that have not previously been PubMatic clients,” he said.

The exchanges in TAM know how the auction functions.

Within the wrapper, Amazon runs a first-price auction, taking the highest price each exchange submits and passing it into the ad server. The exchanges themselves can choose to submit a bid however they want, which, for some, means submitting a higher price that they think has a better chance of winning within TAM and then the ad server.

The exchanges participating in TAM know how much Amazon is charging. Generally, it’s pursuing more of a SaaS model with exchanges, while publishers pay zero.

In contrast, Google exchange bidding charges a percentage of media. Prebid is free, but only if publishers put in the development work.

Server-side solutions are faster, and Amazon’s is no exception. Plus, Amazon has a huge server infrastructure that keeps its costs down.

“Maybe you’ve heard they have some cloud offerings,” Simeone joked.

Neither PubMatic nor Rubicon Project, however, could quantify how much faster the current solution is compared to client-side solutions. And that advantage may decrease as competing solutions like Prebid move server-side.

“Server-side is going to be better-performing, and a better user experience by definition,” Kershaw said.

Why Enter The Wrapper Wars?

If Amazon is running a fair, transparent auction for almost no cost to its publisher partners, what’s in it for them?

“No one implements a wrapper and then excludes the wrapper provider’s demand,” said Simeone, who noted that PubMatic created a wrapper for that very reason. “There is a strategy value in being someone who can aggregate demand and bring it to publishers,” he added.

Because Amazon’s tag will be on the page (and everyone else’s one step away), it will be able to identify users slightly better than the partners in the wrapper.

“You get a few points of advantage in the cookie match, but you also have the cost of running it, which will offset the advantages,” Kershaw said.

The wrapper also gives Amazon a foothold to create more data-infused media products. At the moment, buyers must use Amazon’s DSP in order to take advantage of Amazon’s data, but TAM could open doors to publisher-led buys layered with Amazon’s shopper data.