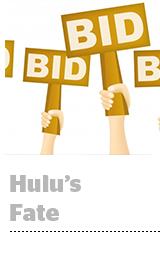 The fate of Hulu depends on the outcome of Comcast’s and Disney’s bidding war for 21st Century Fox. Whoever wins will own a majority stake in Hulu, and both companies have very different visions for the platform’s future. Comcast wants to invest in Hulu’s Live TV bundle to recoup cord cutters and compete in the streaming market, while Disney wants to use Hulu as an adult counterpart to the child-friendly streaming service it’s building to compete with Netflix, reports The Wall Street Journal. Disney most recently topped Comcast with a $71.3 billion bid for 21st Century Fox, but regardless of who wins, the other player will retain a position in Hulu and power on its board.

Verizon is shuttering Go90 at the end of July, three years after it began testing the viability of a free, ad-supported streaming video service. Go90 operations had already been folded into Oath, Variety reports. There’s still plenty of optimism about ad-supported streaming, but subscription-focused players like Netflix and Amazon have gained the most share. Verizon pumped hundreds of millions of dollars into Go90 and pulled all of its (considerable) online distribution levers, without ever coming close to critical mass.

According to research from the Norwegian Consumer Council, both Google and Facebook trick users into giving up their personal data and discourage them from exercising their rights to data privacy. Google and Facebook, for example, have default settings that secure the maximum possible data from users with a click, while opting out is a multistep process, writes Bloomberg.“From an ethical point of view, we think that service providers should let users choose how personal data is used to serve tailored ads or experiences,” the report said. “Defaulting to the least privacy friendly option is therefore unethical in our opinion, regardless of what the service provider considers legitimate interest.”