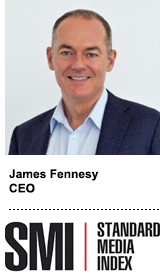 Ten years ago, national TV was a steal.

Today, marketers are getting priced out by skyrocketing ad rates, even as audiences decline.

Despite ratings falling by double-digits across geos and dayparts, TV networks have maintained flat revenues by raising the cost of their inventory, said James Fennessy, CEO at Standard Media Index (SMI), a data co-op used by five of the largest agency holding companies.

Marketers were willing to pay inflated prices because they struggled to recreate national TV’s reach and branding impact in other mediums. But direct-to-consumer (DTC) brands have entered the fray with a willingness to pay premiums that legacy advertisers cannot, further pushing up prices.

“At what point is the revenue going to follow the ratings?” he said. “No one has been successful in predicting that.”

Collecting invoices directly from the billing systems of holding company-owned agencies and the largest independents gives SMI one of the industry’s broadest views of national TV pricing data. The firm has access to 70% of linear TV invoices and more than 50% of premium digital video invoices that run through the holding companies.

AdExchanger: What’s the dynamic in the national TV market today?

JAMES FENNESSY: From our point of view, flat is the new up.

National TV was very cheap a few years ago. But as eyeballs are harder to find, there’s a lot of elasticity in pricing. Brands are looking for large, guaranteed and engaged audiences, which has allowed the networks to push pricing up as audiences have fallen. Ratings have gone down in some dayparts by 20% and revenues have stayed flat. We’re seeing that across the board.

Why are advertisers paying a premium for shrinking audiences?

Advertisers don’t have a high level of trust in digital. They’re concerned about fraud, viewability and [brand] safety. They’re prepared to pay a premium for national TV because they know what they’re getting.

Audiences have been so fragmented in digital. Getting high-quality reach and frequency is a real challenge. A couple of years ago, we saw a lot of brands move heavily into digital, and later a lot of those advertisers came back to national TV because they were losing market share. They were losing brand equity. If national marketers thought digital was really working for them, they’d be moving a lot more money out of TV.

Which brands are able to pay a premium for national TV, and who is being priced out?

DTC brands have tapped out in digital and they’ve started to push hundreds of millions of dollars into national TV. They want to grow reach and brand, and they understand the best place to do that is on national TV.

The networks are replacing traditional brands with DTC brands that are willing to pay. That lifts the overall pricing of the network, which means they still make their numbers.

Where are the CPGs and other legacy brands going?

They’re trying to get back on TV. They’re spending a lot of money on digital, but they’re not getting the ROI. They’re in a tough spot. The question is, do they want to pay the premium, or are they just going to throw more money into digital?

How much more runway do the networks have to keep increasing prices?

With the appetite for brands to get onto national TV, the pricing is still elastic. There’s a little bit of runway left over the next 18 to 24 months.

But the networks are trying to provide more digital inventory to put less pressure on their traditional networks. Premium digital video is up 18% year over year on volume. Pricing is up at similar levels. They’re working very hard to create premium digital inventory that will allow them to grow again. I fully anticipate the networks to grow their numbers in four or five years.

But a lot of the streaming services, like Disney Plus and HBO Max, are launching ad-free.

How many more paid services are consumers willing to have? The networks need advertising to prop up the other side of the business. With so many services available to consumers, you’re wondering what the appetite is going to be for paid services.

How does pricing on AVOD networks compare to national TV?

There’s enormous variability in digital pricing. Our agency partners want to clean up their own data before we release it to the marketplace. But clearly the big players in that space are Hulu, Roku and the networks. All of those guys are up [on volume] in the 18% to 25% range.

Agencies have been integrating their TV and digital video buying strategies. Has this impacted pricing?

There’s no doubt that people are trying to get continuity across those buys. The problem is, the measurement systems aren’t aligned. That’s the great challenge: getting an apples-to-apples comparison.

There’s been a lot of work over the last couple of years to get parity between linear and digital CPMs. But those comparisons are very difficult. Until the measurement is constant, you’re going to have issues with getting pricing at a similar level.