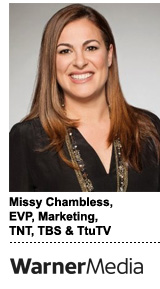 Missy Chambless and her team of marketers at WarnerMedia had big plans to promote tune-in for “Snowpiercer.”

The new TNT show, which premiered in May, takes place entirely on a massive high-speed train in a dystopian future after the Earth is plunged into a second ice age.

To bring “Snowpiercer” to life, they planned to create custom menus and take over a restaurant called Carney’s housed in an old railway car on the Sunset Strip, and freeze the fountain at The Grove shopping center.

“We quickly had to scrap all of that and pivot – and not just for this show,” said Chambless, EVP of marketing at WarnerMedia for TNT, TBS and truTV. “Since the stay-at-home orders started, we had seven series between TBS, TNT and TruTV that were either season one premieres or returning seasons, and each media campaign required a significant pivot.”

Experiential gave way to virtual premieres and campaigns heavily focused on digital, social, mobile and TV. TNT is also running a campaign inviting fans to design their own virtual train cars, of which 1,001 – the fictional “Snowpiercer” train has 1,001 cars – will be published on a microsite along with designs from DC Comics artists, influencers and members of the cast and crew.

“It’s always a dance that you do,” Chambless said, “figuring out where to pull back and how to reallocate while also thinking about the proper tone and making sure you understand what people are watching and their appetite for content.”

AdExchanger: “Snowpiercer” is a post-apocalyptic show. Is it “good” timing for that type of entertainment or are people looking for more feel-good fare right now?

MISSY CHAMBLESS: Some people are looking for comfort food and lighter fare, but there are always going to be people who love shows like this, and we found that to be true for the premiere. We had great viewership.

We’re also about to enter a summer where there aren’t going to be theatrical blockbusters. People want action-packed content.

How are you revamping your media strategies in light of COVID-19 disruptions?

For “Snowpiercer,” we had outdoor advertising planned in key markets, including New York and LA, and in-theater advertising through a deal with National CineMedia to run the trailer before movies. Neither made sense anymore, obviously. We went virtual and turned to in-home media.

What did you do?

One thing we did is to work with all of our sister networks within WarnerMedia, including Adult Swim, TBS, truTV and Bleacher Report, to essentially freeze their programming. As you were coming out of a commercial break – say you were watching “Rick and Morty” – we would freeze the show so that it looked iced over and then a train would burst through and go into a promo. We did the same across several digital platforms. This was disruptive, high-impact advertising. We’d wanted to bring that awe factor in real life, but now we brought it as best we could to a screen.

We also had a virtual premier party for “Snowpiercer,” which ended up going very well. Audiences are used to seeing the glitz and glamor of talent on the red carpet. Now they could see the talent in their homes and actually chat with the cast. It brought a certain level of intimacy.

What about programmatic advertising?

We’re very heavy programmatic advertisers, especially for a show like “Snowpiercer” where we have custom targets. We’re heavy on Reddit and entertainment and fan sites, which were key for launch. To start, the messaging was focused on tune-in, but as we transition to being in-season, we’re quickly shifting the message to also include participation in the 1,001 cars campaign.

For another show premiere in May called “Tirdy Works” on truTV, which is about a sweet, endearing woman named Mary in Somerville, Maine who has a business making crafts out of moose turds, our team quickly created what we’re calling a “watch & sniff” mailer that takes you into the local scents of Somerville. You can follow along in an episode and actually smell the local firehouse, the woods, the Mary Jane that Mary smokes, the fresh air of Somerville and even the moose “tirds.” It’s almost like an extra layer on top of the second screen.

Initially, we sent the mailer to influencers and press. After the show launched, fans DMed us on social media to get their own “watch & sniff” cards. Around 100,000 people received the cards. Starting with the fourth episode, we had pop-ups in the lower third of the screen inviting people to get out their cards and sniff.

How do you measure the results for this sort of thing?

It’s all about engagement: how many people participate, how many shares on social media, are they coming back.

What engagement and consumption trends have you noticed between March and now?

We’re seeing a significant lift in people watching via connected devices: Roku, Xbox and different gaming platforms. For “Snowpiercer,” for example, we shifted money to gaming platforms as we saw gaming grow during this time.

Ratings have also gone up around 15% on TBS, with maybe a 1% to 2% fluctuation by week. We’ve also seen a big uptick in ratings on TNT for movies. People are watching more and longer.

They’re also consuming the lean-back programs that we’ve acquired even more than before, like “Friends,” “Seinfeld” and “The Big Bang Theory.” Comfort food comes in many forms.