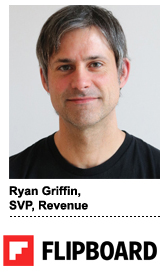 “On TV & Video” is a column written by the sell side of the digital media community.

After this exclusive first look for subscribers, the story by AdExchanger’s Allison Schiff will be published in full on AdExchanger.com later today.

Incorporating video more deeply into Flipboard is “a natural extension” of its role as a content discovery platform, says Ryan Griffin, Flipboard’s SVP of revenue.

“Bringing video natively onto our platform just makes a lot of sense for us,” Griffin said.

Flipboard has been on that journey since February, when Flipboard TV, the company’s new curated short-form video service, launched exclusively as a premium subscription offering on Samsung Galaxy devices. In August, Flipboard expanded ad-supported access to Flipboard TV across all devices.

Flipboard is adapting the same technology that powers its article recommendations for video content suggestions on the platform.

“We’re learning from engagement, and the more someone finds themselves engaging with video, the more video they’ll see,” Griffin said. “We want to be as dynamic as possible so that we’re delivering what users actually want as evidenced by their behavior.”

AdExchanger: What is motivating the wider embrace of video on Flipboard?

RYAN GRIFFIN: Premium short-form video is a differentiated value proposition. We’re mobile centric, but we’re also on the web, and we wanted to get more progressive about how we surface content as part of both the mobile web and desktop web experiences.

How is Flipboard monetizing its native video inventory?

Video ads aren’t entirely new to Flipboard. We’ve had a few iterations of in-feed formats that we continue to run. We’ve had success with Magnite, SpotX, AdX and others through programmatic channels, and we’ve also done a lot of direct deals.

So, we’ve got a lot of the rails and pipes set up already. What’s new is truly in-stream pre-roll video ads. And with that comes a degree of performance we weren’t able to access natively before.

We have a handful of direct advertisers running in a beta right now, which is helping us benchmark performance and understand what optimizations we might want to make, and we’re doing a very limited degree of programmatic backfill. It’s still early days in terms of the product experience and the inventory scale, but we’re going to ramp that up quickly.

There’s also an ads-free subscription version, which is only available to Samsung Galaxy devices for now. It’s been great for our learning, though. We’ve been able to collect a ton of data from our subscribers on their expectations – and how we do or don’t meet them – and that’s informed our freemium product in a big way.

Are you finding that advertisers are attracted to pre-roll?

The thing with pre-roll is that you can have straight-up media KPIs, high completion rates and viewability. It also tends to perform well in feed. Having more performance in our video supply will be a big boon for us.

It’s as much about breadth as about depth. We have partnerships with more classic publishers, like Gannett, USA Today, Dow Jones, Group Nine and Complex, and we have new relationships with video aggregators, like Video Elephant. We’re also working with an influencer agency called Spacestation to bring in independent content creators and producers.

And then there are the TV networks and local TV affiliates. We’ve made a big investment in local by pulling in local video content and we’ll continue to expand into new markets throughout the year.

What else is on the video road map for you guys?

Right now, people navigate to Flipboard TV through our Explore tab in the app. The next step will be for us to find the right way to weave video in throughout the experience. It’s something we’re working on. Users will start to encounter more video on Flipboard overall.

The goal here is to integrate video viewing with article-based consumption in a thoughtful way. We don’t want to feel like a video app all of a sudden, because that’s not historically what folks have come to us for.

We still have a lot to learn. One thing we’ve started talking about, for example, is new screens and simple casting. I can envision a scenario where someone is watching something on Flipboard on their phone and they want to put it up on a CTV screen. Multiscreen is early, but it’s going to be core to our future.

What sort of engagement are you seeing with video?

Engagement has been strong, particularly with Storyboards, which is a new unit that people can use to curate content, anywhere between three to five items to do with a single topic. You can think of it like a thematic organizer. We’ve found that Storyboards with video incorporated are generally the best-performing Storyboards we have.

People engage more because this type of content is shared more. These signals are very encouraging, and it just makes us want to invest in video even more.