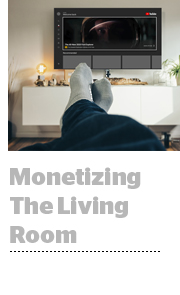 YouTube is doing its damndest to appeal to TV advertisers.

On Tuesday, YouTube made its masthead ad format available within the YouTube TV app through an open beta. Ford was an early beta tester. The unit will be generally available on TV screens sometime in Q4.

The masthead format already exists for YouTube on the web and in the YouTube mobile app. The unit sits prominently at the top of the screen on the homepage, where it autoplays for several seconds with the sound off. If someone decides to interact with it, the unit expands to full screen and the sound starts to play.

The TV version is no different, but there is one major nuance.

But masthead ads for TV will only be sold as a reserved placement, which means advertisers need to reach out to their reps if they want to buy.

“Increasingly, we’re finding that buyers want to reach just the users they care about and in a more personalized fashion,” Kattukaran said.

Which is why advertisers will have the option to buy the masthead either only in the YouTube TV app or as part of a cross-screen buy. Some advertisers, particularly TV buyers, are casting about for a new way to reach cord cutters.

The TV screen has been YouTube’s fastest-growing platform for the last few years, with more than 250 million hours of video consumed per day “in the living room,” Kattukaran said.

“We’ve heard from a lot of advertisers that it’s difficult for them to find former TV viewers in what’s a very fragmented connected TV and OTT space,” he said. “Scale and reach are the top things on their mind. But once you solve those problems, the next thing they want to know about is what high-impact ad formats are available.”

A branding unit is also helpful as a way to up the ad load without killing the user experience.

“Formats like the masthead do a good job of giving users a choice,” Kattukaran said. “If the ad isn’t relevant, people can just scroll away from it.”

Beyond new and expanded formats, YouTube has an “aggressive road map” for CTV and OTT centered on measurement and helping buyers plan better. Neither is as “sexy” as immersive ad units, Kattukaran said, but both are an integral part of how buyers buy, and so they’re what his team is squarely focused on for the foreseeable future.

“This is what advertisers are asking for,” he said.