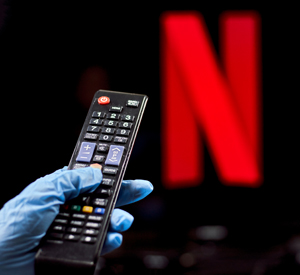 News flash to no one: The economy is going up in flames … but Netflix is on fire.

Millions of people around the world are under stay-at-home orders, and lots of them are signing up for Netflix, which had its biggest quarter for user growth in Q1 with the addition of 15.77 million new paid subscribers. Global paid memberships now total 182 million.

Overall revenue grew 27.6% in the quarter to $5.77 billion. The company’s free cash flow improved as most film and show productions were shut down for the duration of the coronavirus crisis.

Here are the top three takeaways from the company’s earnings call on Tuesday.

Netflix is an obvious beneficiary of a world on pause.

“We’re in the same uncertainty that everyone else is,” said CEO Reed Hastings. “The things we are certain of: The internet is growing; it’s a bigger part of people’s lives, thankfully, and people want entertainment – they want to be able to escape and connect whether times are difficult or joyous.”

But Netflix isn’t planning for its subscriber growth to continue at the same pace for the rest of the year. As governments lift home-confinement restrictions, Netflix says it expects viewing and growth to decline as people go back to their normal social lives and likely take a break from TV after the lockdown.

Netflix projects 7.5 million global paid net additions in Q2, although it admits in its shareholder letter that this is largely guesswork.

Unlike some of its competitors, Netflix’s content pipeline is full, and the production stoppage due to COVID-19 will affect planned releases throughout the year and even into 2021.

“One thing that is maybe not widely understood is that we work really far out relative to the industry, because we launch all our episodes at once,” said Ted Sarandos, Netflix’s chief content officer. “Our 2020 slate of series and films is largely shot and in post-production remotely in locations all over the world.”

Netflix is also planning to double down on its unscripted shows, such as “Tiger King,” which exploded after its release in March.

Viewers watched more than 5.3 billion minutes of the docu-series during the week of March 23, according to Nielsen’s SVOD content ratings, eclipsing “Ozark” and the second and third seasons of “Stranger Things.”

“It turned out to be such an unbelievably well-timed distraction from what was happening in the world that gave people something to talk about that wasn’t necessarily in the headlines,” Sarandos said.

People like to talk about the streaming wars, but no one is in a position to win the whole shebang.

Competition in the streaming market is “great for the consumer,” Hastings said, and in terms of competitive services, there is “nothing we can do about any of them – not about video games or YouTube or any other competitors for time.”

“We just try to figure out how we can have the best service we can,” he said. “We’ll get part of consumers’ viewing – no one is going to get it all. And it’s working out very well for us.”

Of course, there’s always the potential that consumers decide to drop certain services during a recession. But, by the same token, people spend more time at home when the economy is in the dumps.

And Netflix has no plans to mess with its pricing structure anytime soon, said Chief Product Officer Greg Peters.

“At this point, we’re not even thinking about price increases.”