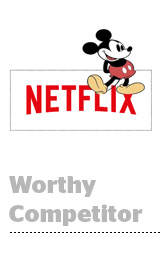 There was a time when Netflix CEO Reed Hastings was glib when people asked about the competition. He’d point to sleep and video games like Fortnite as the streaming giant’s main rivals for attention.

But on Netflix’s third quarter earnings call on Wednesday, Hastings was a lot less flip.

“Disney will be a great competitor and Apple is just beginning, but they will probably have some great shows too,” he said.

Netflix’s shareholder letter was more blunt: “The launch of these new services will be noisy. There may be some modest headwind to our near-term growth, and we have tried to factor that into our guidance,” which is 7.6 million global paid net adds for Q4.

This quarter and last were misses, though.

After reporting a serious drop in subscriber growth in Q2 – adding only just more than half of the 5 million subscribers it expected – Netflix also missed its subscriber growth goals this quarter, albeit only by a smidge, adding 6.8 million new subs rather than the 7 million it forecasted.

A lot of that had to do with Netflix’s price increase earlier this year in the United States, which led to some churn, said CFO Spencer Neumann. Still, the downward trend is alarming to investors, who worry that streaming competitors on the horizon will put additional pressure on Netflix’s ability to grow.

But SVOD isn’t a zero-sum market, said Dan Salmon, managing director of US internet and media equity research at BMO Capital Markets. He called the streaming wars narrative – Netflix vs. Disney to the death – “false.”

“Let me be frank – that is a bunch of bull … that there is Netflix and there is Disney and only one shall survive,” Salmon said during a presentation at AdExchanger’s Programmatic I/O conference in New York on Wednesday.

“There is a very well-established paid TV ecosystem that continues to whittle away,” he said. “We’ve seen subscriber declines [there] for the last six or seven years, and that will accelerate with the new streaming products.”

And although Netflix is obviously competing with Hulu, Amazon Prime, HBO Max, YouTube, Disney, Apple and even NBC’s Peacock, all of them, including Netflix, are looking to grab share from traditional television, Hastings said.

“All of us are competing with linear TV,” he said, “and we’re all relatively small compared to linear TV.”

In other words, the addressable market is massive, even though SVOD and AVOD services are launching like it’s going out of style. Netflix’s most recent subscriber count is 158 million overall, 60 million of which are in the United States, which is relatively big, but the ceiling is high.

“There are about 2 billion active users of Facebook and YouTube, and we’re obviously a fraction of that and continuing to grow,” Hastings said. “Equilibrium is far away from where we are today and not something we think about – we think about how we grow.”

Despite falling short of expectations for the quarter, Netflix’s stock popped more than 10% in after-hours trading as a result of a 31% YoY increase in revenue to $5.2 billion and nearly $1 billion in operating profit for Q3.