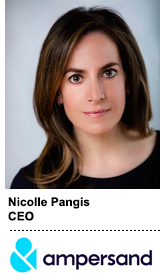 NCC Media, the sales consortium owned by Comcast, Cox and Charter, rebranded as Ampersand Monday and released a bunch of new products, including a data-driven linear TV platform.

Here’s what you need to know.

That data can be applied across all 85 million households represented by Ampersand.

“Tools like this are going to give a view of audiences that pivot very naturally into the addressable and digital world,” said CEO Nicolle Pangis.

Ampersand teams up with OpenAP

Ampersand also partnered with OpenAP, a consortium of TV networks including NBC, Fox and Viacom, to standardize audience definitions across both companies’ platforms.

Advertisers buying inventory from multiple sellers have to deal with different taxonomies, so a segment that’s in-market for an SUV can differ between networks. The OpenAP-Ampersand partnership lets buyers build custom audience segments in OpenAP and port them directly over to Ampersand’s platform.

“It’s very difficult for buyers to measure and be smarter in the next ad campaign if they have to transact different audiences in both environments,” Pangis said.

NCC’s name change to Ampersand is meant to underscore how it’s a partner to networks and buyers.

Ampersand is trying to get national TV programmers to make their 14 minutes of national linear TV inventory addressable. The push is part of Comcast’s On Addressability initiative, launched in Cannes, to turn on more addressable inventory across the market. Ampersand hasn’t signed on any programmers yet but is in active conversations with networks.

“There are white space opportunities for us to partner with programmers in ways we haven’t historically done because of this notion of addressability and data-driven TV,” Pangis said.

Pangis, however, noted that Ampersand has a legacy of collaborating across companies.

“We believe that working with partners in the TV ecosystem that want to evolve it to create more consistent ways to buy and sell media are important,” Pangis said.