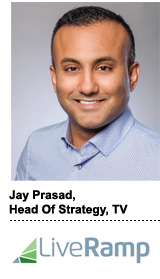 Taking in the sprawl of CES in Las Vegas, one thing is clear: “There’s a ton of focus on streaming – it’s front and center,” according to Jay Prasad.

The same can be said of Prasad’s new employer.

Prasad joined LiveRamp in January after five years as chief strategy and business officer at video tech startup VideoAmp. He is tasked with creating a go-to-market strategy for LiveRamp’s TV-related offerings, particularly the products coming out of its recent acquisition of TV analytics company Data Plus Math.

AdExchanger caught up with Prasad for a few hot takes.

On LiveRamp TV: “Some streaming is going to be ad-supported and some isn’t, but they all need infrastructure around data and segmentation. Creating an identity structure that allows you to match to other parts of the ecosystem is a core part of LiveRamp’s business, and it’s becoming increasingly important in TV and video.”

On LiveRamp TV’s go-to-market strategy: “The first thing we want to do is figure out how we can play a bigger role in this year’s upfronts by enabling more cross-screen and outcome-based deals.”

On measuring business outcomes: “Measuring reach and frequency across screens, measuring outcomes and pushing the results back into the workflow – this is the foundation for an alternative currency for the market, and it’s why the Data Plus Math acquisition was so strategic for us.”

On Data Plus Math: “We’re going to keep investing in Data Plus Math, in more people, more engineering, more products and in marketing. It’s such a small team and the demand for them far exceeds the number of people there now. We’ll be giving them a lot of resources.”

On future M&A: “There are definitely some interesting technologies in and around CTV that could be very accretive for us, particularly assets related to efficiently measuring CTV. There could also be other opportunities that are similar to assets we already have but that bring us more scale, especially in international markets.”

On competing with VideoAmp: “Data Plus Math is slightly competitive with the measurement aspirations of a lot of companies, and VideoAmp is one of them. Then again, there are a lot of players in that space, like VideoAmp, like iSpot, like Inscape, that both partner with LiveRamp and have measurement solutions in the market. We offer one alternative to marketers, and marketers can choose who they want to work with.”

On when data-driven TV is going to take off: “When you can plug into outcome-based measurement. People will still be able to get the GRPs they’re comfortable with, but they’ll also get more sales-based measurement with their index-based plans. The buy side needs to change some of its siloed behavior in terms of planning and buying. That will start to happen more naturally as brands continue to embrace customer data.”

On why the sell side is more active than the buy side in pushing addressable: “The sell side has taken the initiative here, because it’s their fate that’s being determined. But it’s not just about survival, it’s also an opportunity to be more strategic. Rather than waiting for buyers to say, ‘This is what we want,’ the sell side is creating the infrastructure that it wants. That’s why you see things like OpenAP coming together, because the sell side knows they can make this happen at scale if they partner.”

On leaving VideoAmp: “After five years, I took some time off this summer, started my own advisory business, did some angel investing, started sitting on a few boards and was just planning on advising VideoAmp from the sidelines for the next year – and then the LiveRamp team reached out. It was too good to pass up. I’ve been working on this TV-to-digital transition for over a decade – which is scary – and I realized that I wasn’t quite done yet. I have this feeling it’s going to be a pivotal year for the TV industry.”