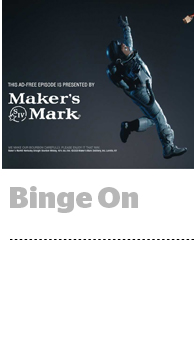 The advertising industry has a problem: People don’t want to be interrupted by commercials anymore.

Hulu is trying to fix that by offering new ad units that are less disruptive. On Thursday, the streaming service released an advertising experience designed to lighten ad loads for people watching multiple episodes of a show in a row.

The new binge ads are short videos that tease an ad-free episode or offer the viewer a coupon code that they can redeem online, depending on the advertiser’s business objectives.

Here’s how it works: Viewers will see regular commercial breaks during the first two episodes of a show. Before the start of the third episode, Hulu’s machine learning will trigger a binge ad experience depending on the user’s viewership behavior, the time of day and the program they’re watching. Binge viewers will receive a short video message from the brand teasing an ad-free episode or a coupon code before the show starts. Viewers do not have to use the coupon code or opt into any type of commercial viewing to receive an ad-free episode.

Hulu will cap binge ads at three times a day per person. The company declined to comment on pricing for binge ads.

“Because the binge experience starts at the very first episode, we have to anticipate who is going to be in that audience segment,” said Jeremy Helfand, VP and head of advertising platforms at Hulu.

Exclusive launch partners piloting the ad unit are Sparkle Paper Towels (owned by Georgia-Pacific), Cheez-Its and Maker’s Mark. It will be available generally in the second half of 2020. More than half of all viewing on Hulu happens in “binge mode,” which the company defines as watching three or more episodes of a given show in a row.  But the ad experience hasn’t adapted to this new way of watching TV, Helfand said.

“We want to innovate the ad experiences our binge-watching viewers have,” Helfand said.

Advertisers can bring their first-party data and use any of Hulu’s available targeting capabilities to purchase binge ads. But the ads, which will only be available on programs Hulu has sales rights to, will not be sold programmatically because Hulu wants input on the creative process.

“The creative is tailored to the situation to make it seamless to the overall experience,” Helfand said. Hulu worked with Publicis Media as its exclusive agency partner for the launch so it could co-develop the creative units with the agency’s input. The platform tends to work with advertisers from a single agency group on launches so it can more easily incorporate their feedback into the product, Helfand said.

“TV advertising needs to transform,” Helfand said. “Unless the industry changes the way they deliver ads in this environment, it will not meet the needs of either the viewer or the advertiser.”