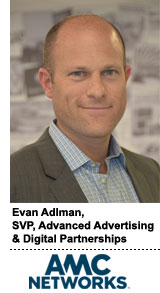 AMC Networks – like the TV industry as a whole – is stepping up its efforts to make TV more data-driven.

And a large part of that initiative means making its data across all AMC brands – including IFC, BBC America, SundanceTV and We TV – available to advertisers.

In late December, it brought on Condé Nast’s previous programmatic lead Evan Adlman to lead its addressable and advanced advertising efforts across linear and digital.

And he’s not the only digital-to-TV hire at AMC Networks. Adlman was brought on by Kim Kelleher, who previously served as Condé Nast Chief Brand Officer. She joined AMC Networks as president of advertising sales and partnerships in September 2019.

As part of its push beyond demo-based sales, AMC Networks wants to standardize how it sells and packages its data, one reason it became a founding member of Project OAR, which seeks to create a common addressable TV standard, in May 2019.

“AMC has a lot of opportunity to lead with an audience vs. just a demo,” Adlman said. “And to think about how addressable can drive guaranteed outcomes for marketers.”

AMC Networks is already starting to think about how it can add more data-driven offerings during the upfronts in late spring.

The network already has the technology to execute. Adlman, who will also oversee ad ops and partnerships with AVOD services, said AMC’s stack is cleanly structured. “It’s not a Frankenstein setup – it’s a well thought-out, well-designed setup. But we do see an opportunity to bring more unified decisioning to the way we’re handling our direct and indirect demand today.”

Though the TV advertising space is less complex in many ways compared to the digital Lumascape, access to data is more distributed in TV – which will affect how audience buying in the medium plays out, Adlman predicted.

“There’s a lot more parties involved in [audience buying]. You have the carriers of MVPDs, you also have the networks like ourselves, you have the platforms in between and you still have the set-top box,” he said. “All the players want to control their own destiny and access to data. Unpacking all the different parties and getting them to work together is going to be a hurdle.”

Given how data and technology transformed online advertising, Adlman sees digital hires like himself poised to guide the TV industry as it evolves its offerings for buyers.

“Everything I have learned about automated advertising is easily applicable to the TV set and connected TV,” Adlman said.