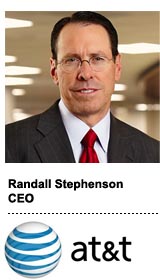 AT&T, which closed its acquisition of Time Warner on Thursday, will acquire more companies to support its Advertising and Analytics unit, CEO Randall Stephenson said Friday during a CNBC interview. Watch it here.

“Those are the kinds of things we’ll be bringing to market,” he said. “Obviously, these will be ad-supported models.”

After name-checking Brian Lesser, the former GroupM honcho who now heads up Advertising and Analytics, Stephenson said: “You should expect some smaller – not like Time Warner, but smaller – M&A in the coming weeks to demonstrate our commitment to that.”

Stephenson has frequently brought up Lesser in interviews, underscoring the importance he places on advertising in AT&T’s future.

During the CNBC interview, he noted Turner’s “massive advertising inventory.”

“We brought Brian Lesser over from WPP, I think one of the world’s top advertising executives, to build a platform to take advantage of the Turner advertising inventory,” Stephenson said.

“This is the first time we’re building 5G network capabilities, building user interfaces that are digitally enabled, that are all about the experience for the consumer to consume premium video, putting all of this together and building comprehensively this environment,” Stephenson said.

Read more about the ad stack AT&T is building.