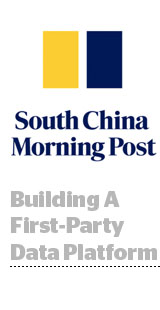 Six months ago, South China Morning Post decided to cut itself off from third-party data and switch to a first-party data platform.

“We wanted to give the whole business – commercial and editorial – access to quality first-party insights that they could use across the whole business,” said Ian Hocking, VP of digital at South China Morning Post.

The first-party data platform will allow South China Morning Post to achieve the next phase of growth. On the editorial side, that means turning its vast scale into a loyal readership. On the commercial side, that means giving advertisers more precise targeting capabilities.

South China Morning Post is part of a growing wave of publishers embracing first-party data. Hocking used to work at News UK, which built data platform News IQ. The New York Times recently announced that it would phase out third-party data, and publishers such as Vox Media, with Forte, are productizing their first-party data.

“As publishers, we own that relationship with the user, and know our audience better than anything else,” Hocking said. “But the key to unlocking that data is knowing who a user is and creating a platform that allows us and advertisers to recognize that value.”

During that time, the century-old newspaper grew from a couple million online visitors to more than 50 million monthly active users seeking information about the region. Only 11% of readers live in Hong Kong, the current political hotspot where the publisher is based.

Half of the English-language publication’s global audience lives in Asia (though a firewall prevents access to the site in China), and the other half read from the United States or Europe.

Standing up a first-party data platform

South China Morning Post picked 1plusX as its customer data platform. The CDP uses first-party cookies and has allowed the publication to bring together disparate sources of data – such as polling, ad log and CRM data – and recognize it in one space.

Six months in, the publication’s CDP can identify 75% to 80% of its returning users. Although it takes time to amass that level of coverage, South China Morning Post decided it wanted to stop using its previous DMP, Lotame, right away, along with all the third-party data that came with it.

“We ripped it out right away. Third-party data is a crutch,” Hocking said. “Until you take it out, you don’t understand where you’re strong, where you have good data and where you’re missing data. Our intention was not to cover up the cracks.”

With third-party data turned off, the Post started building out new audience segments for its advertisers. It now offers 25 different turnkey segments for advertisers, including a luxury fashion segment, business influencers and auto intenders. But Hocking wants to move to a more flexible setup, where advertisers can start with broad segmentation and then optimize in flight to the types of attributes that drive performance.

Using the platform, South China Morning Post wants to take its light users and turn them into regular readers. It can analyze a reader’s location, the article they’re reading, what platform they were referred from and the type of content they read – such as short form or long form – and then build different experiences for readers with different preferences.

A better understanding of its customers will also allow the South China Morning Post to figure out which social media platforms will deliver loyal readers, not necessarily scale.

“We are really looking into long-term value,” Hocking said. “And these loyalty metrics inform our platform strategy and how we work with YouTube and Facebook and the like.”