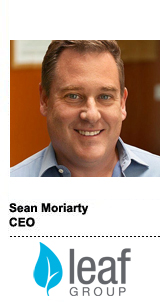 Ever since its rebrand in 2016, Leaf Group has been focused on – forgive the pun – turning over a new leaf.

The formerly named Demand Media worked to overcome its reputation as a content farm that churned out low-quality articles, prioritizing high placement in Google search results above all else.

In many ways, the transformation of Demand Media to Leaf Group has been emblematic of the larger trends in advertising and media over the past decade. Demand Media was once one of the hottest brands in digital publishing; its IPO in 2011 valued the media company at about $1.5 billion.

But following algorithm changes Google made to improve the quality of its search results, the publisher’s old business model quickly lost viability.

Now reincarnated as Leaf Group, the media company positioned itself at the intersection of digital publishing and ecommerce. Last year, it caught the eye of Graham Holdings, which acquired the publisher in June 2021. Graham Holdings owns a portfolio of businesses ranging from restaurant groups to car dealerships to consumer internet businesses. It also owns publishers like Slate and Foreign Policy, and it has bought and sold both the Washington Post and Newsweek.

Leaf Group CEO Sean Moriarty talked to AdExchanger about why the publisher made ecommerce central to its brand philosophy, its efforts to change its perception in the digital publishing sphere and what the future holds for the publisher as part of Graham Holdings’ larger portfolio.

SEAN MORIARTY: Being a small company in the public markets can be very difficult, with tremendous short-term pressure. Inside Graham, we get the benefit of being part of a bigger organization that’s long-term in their thinking and gives us expertise and support in an environment where we can focus every day on building the best business possible.

Graham also owns Framebridge, which is a great direct-to-consumer brand in the design and decor category that we know so well with Society6 and Saatchi Art.

They know a lot about customer acquisition and retention, things that are fundamental to ecommerce businesses. There is ample opportunity for best practice sharing and ideation and for us to get better together.

Another major acquisition last year was Dotdash’s acquisition of Meredith. Dotdash has historically been a competitor of yours. How does your content strategy and your monetization strategy differ from theirs?

Dotdash is a really well-run business. [CEO Neil] Vogel’s done a dynamite job with it. I think they have seen and acted upon the opportunity that a lot of other people either didn’t have the capital, the expertise or the conviction to act on, and they’ve been richly rewarded for it.

We both fundamentally believe that high-quality content delivered to an audience is still a pretty damn good business. It’s also a space that takes real investment and real focus. They’ve done a very good job of not chasing the flavor of the month and focusing on content and audience development.

How is Leaf Group diversifying its ad revenue through ecommmerce?

When you have millions of visitors who love and trust the brand, and you’re introducing them natively to new products, there’s really no ceiling to what you can accomplish with that audience.

We’re doing real work on everything from affiliate commerce to the launch of the Well+Good shop. We know what those customers are looking for. And that not only makes that audience attractive to advertisers but gives us the opportunity to build out services for that same audience that we operate ourselves.

Some publishers that prioritized the commerce end of their business have seen it grow more slowly than expected, like BuzzFeed. What market-wide trends do you attribute that to?

In some of the cases that you’re referring to, a lot of it was driven by expectation, scale and putting targets out in the market. To integrate commerce into a content site takes real thought and care to get the product offering right. I don’t think there’s any sort of natural law which constrains these opportunities. It’s more that this is still pretty early, and people are figuring it out.

Loads of affiliate links with pretty thin commission, that really isn’t integrated commerce. That’s monetizing a preexisting audience in a somewhat opportunistic way. There are real limits to the scalability of that.

One of the priorities for Leaf Group since it rebranded from Demand Media is to dispel the perception that the company is a content farm. How have you worked to bring your content curation up to a level where you can trade on it to grow your ad business?

If you look at Livestrong, a half dozen years ago it had a library somewhere in the neighborhood of 400,000 articles. It has less than a tenth of that today. But the quality of that content, and the caliber of the writer and the contributor, is much better.

Graham Holdings bought Leaf Group for $323 million, which was down significantly from Demand Media’s valuation of $1.5 billion at the time of its IPO back in 2011. This drop has been attributed to changes Google has made since then, like implementing the Panda search algorithm and the reprioritization of Google AMP links. How fair is that assessment? And how is Leaf Group adapting to those changes?

IPO price is going to reflect levels of investor enthusiasm at a single moment in time. I don’t think there’s much of a comparison you can make to two completely separate moments in time and two very different businesses at different stages.

If you go back to 2011, that was Google’s first algorithm update in a decade. It was designed to improve the quality of content surfaced in search results. Demand Media at that time had a lot of thin content that was produced rapidly and very inexpensively and filled a lot of holes in Google’s index. As that space became more competitive, and as Google’s quality screen continued to improve, the company had real challenges.

Every time Google releases an algorithm update, they’re trying to enhance the user experience. Taking fair advantage of that intent is just common sense. But creating great stuff that ranks well in Google is really hard to do. The companies that are most mindful of the quality of content and its relevance and the way it’s packaged, designed and delivered consistently do well in search, which is the way it’s supposed to be.