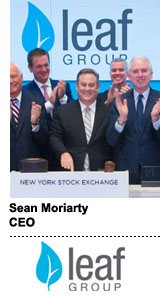 Sean Moriarty wears a marketing hat half the time and a publisher hat the other half.

He joined Demand Media in 2014 as its CEO and has since grown the company’s commerce business to more than half of its revenue.

Moriarty also led Demand Media’s rebranding to Leaf Group in November to move it away from its content farm roots and disappointing IPO. The company, valued at $1 billion post-IPO, now trades at a fraction of that with a market cap under $200 million.

Moriarty said he was aware of the company’s challenges when he joined as CEO.

“I saw a business which had been in decline and somewhat neglected,” he said. “The challenge was that the team wasn’t particularly strong, and the products weren’t particularly good. But I know how to build teams and products.”

Brands like eHow and Livestrong were in “very good categories with very big audiences,” he added. “I thought, ‘These brands can be restored to health.’” He projects the media business will return to growth this year.

He also removed more than 80% of eHow and Livestrong articles that were written when search queries were mined to create articles.

“Livestrong now has the smallest content library that it’s ever had and the highest-trafficked audience it’s ever had,” Moriarty said.

The IAC and Ticketmaster vet talked with AdExchanger last week at the New York Stock Exchange after ringing the opening bell for the first time with the company’s new ticker symbol: LFGR.

AdExchanger: Content and commerce hasn’t worked out well for most media companies. JackThreads, for example, just laid off staff after being spun off from Thrillist. What’s different about your approach?

SEAN MORIARTY: Our view is that a brand in a business needs to stand on its own two feet. If that business can only be successful if it leans heavily on another business, then it’s probably not a great business.

We’re not opposed to brands helping one another. But their reason for being has to be independent. Then, any opportunity we find from a corporate perspective where the brands can help one another is gravy.

On the media side, Demand was among the first to embrace a programmatic sales-only approach.

Before I joined, the company had exited the direct branded business and moved completely to programmatic. I don’t second-guess decisions that predate my involvement. I do think moving to programmatic exclusively made it a pioneer of sorts with programmatic, and we understand it well some three years into it.

That said, we think we have a real opportunity to sell branded direct. Over the past several quarters, we’ve brought in some sellers to sell to brands and agencies directly. The world is moving to programmatic, but we think we can increase our monetization and yield by having high-quality direct sellers as well.

On the ecommerce side, you’re a marketer. Do you find that programmatic and remarketing are the tactics that work to drive ecommerce sales, or do you need to look beyond digital to drive results?

We do really good classic digital acquisition and retention marketing, social, search – all the conventional digital channels. But we think there is room offline for brand building and customer acquisition as well.

Both Saatchi Art and Society6 send out beautiful catalogues. Buying art or physical products with art on them is a physical, tactile thing. There is something about the catalog that can get someone to engage with a brand much more deeply.

We acquired The Other Art Fair in September, where emerging artists come together in a single venue over a three-day period and we have 10,000 to 15,000 attendees. We think that helps burnish the Saatchi Art brand. We haven’t done traditional media yet.

You mention spending a lot on search and social. Facebook and Google have been reported to capture 85 cents or more of every incremental media dollar. What does that mean for you on the media side?

There is still real opportunity for businesses like ours to grow because the category is huge, and it’s growing. It’s probably too high-level to say that, because Facebook and Google are giants and getting bigger, therefore there is no room to grow. I don’t think you are competing for share as a publisher brand with Facebook and Google. Your opportunity and challenge has much more to do with competing against brands in your category, and we compete favorably in the categories we are in.

When you buy ads on the media properties do you own, does that give you insight into the publisher side of the business?

I don’t know if that’s specifically the case, but when you are running both commerce and digital publishing businesses, you do develop a deep understanding of audiences and context. A lot of people talk about getting to the right demographic, but context is everything. Because we are in multiple high-passion verticals, we understand how audiences respond in various contexts.

One of the things you can’t do is say, “I’m targeting customers between the ages of 18 and 24 who are females, and independent of context I can serve them an ad or call to action and they are going to respond to it.” You want to make sure that the context is right to interject yourself in that interaction.

Demand Media is the poster child of how algorithm changes can dramatically impact a business. As publishers depend more on platforms, do you think more are setting themselves up for that sort of reckoning?

There is no question that dominant distributors, Facebook, Google and, down the road, Snapchat, have the ability to introduce significant volatility. That said, the brands that have had significant challenges have been brands that are underdelivering on their obligations to audience. If you lose an awful lot of traffic through a distributor’s channel, it’s likely that your content and your audience’s connection to the content isn’t as strong.

No one has ever had a good time when they are slave to a dominant distributor, in any business, in any category, online or offline. I wouldn’t build a business exclusively off the back of Walmart if I were in the physical products business, and I think the same is true online.

You’re an adviser to a number of companies. What do you make of the VC-backed publisher trend?

Digital publishing tends to conform to feast-or-famine movements. Every three to five years, there is a brand that’s created that captures a big audience and becomes a household name. You look at Huffington Post, Business Insider – these are brands that rose quickly, created tremendous value on the way up and are here to this day.

For every one of those, there are 10 to 15 that don’t make it. I don’t think that’s a category issue as much as it’s really hard to create brands that matter and stand out.

And ad tech seems to be undergoing a period of consolidation. What’s your analysis of the environment right now?

It’s funny to see a sector come in and out of vogue as much as ad tech has. If you step outside the volatility, in 10 years, do we think there will be a more sophisticated need for ad tech? I think everyone would say, “Absolutely.”

One of the challenges with the category is that it blows cold and hot. When it’s hot, there are loads of capital and too many companies. There’s not enough room for all of them; not all are doing innovative things. And because of that, there is a washout.

It’s precipitated by too much capital funding too many like businesses that aren’t differentiated. And it seems to be a winner-take-most market. There’s value to create, but it tends to accrue to a handful of players in an otherwise crowded category.

What direction ad tech will go from here?

But incumbents aren’t the ones that drive innovation. I tend to think the future will be like the past. The category will blow hot or cold, and when things are good, capital flows in. Companies either make it on a standalone basis or get acquired by a Facebook or Google.