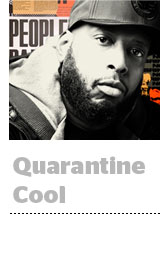 Cool culture didn’t go into hibernation during the pandemic – but where people go to find entertainment has changed. As the publisher that seeks to be the epicenter of cool, UPROXX is changing how it distributes content to meet the changing behavior of people stuck at home.

“Digital media companies need an eye toward not just innovation, but adaptation,” said UPROXX Chief Strategy Officer Paul Josephsen. The publishers that will best weather the epidemic are “the ones that aren’t afraid of change.”

UPROXX started broadcasting on Instagram Live because it observed people were spending much more time on social media during the pandemic, making them more likely to check out a livestream. Podcasting listenership overall has declined and listening behavior has changed during the pandemic, so finding another outlet to distribute content helps retain audiences and attract new subscribers.

UPROXX, which is owned by Warner Music Group, also participated in PlayOn Fest, hosted by its sister brand, Songkick. The event streamed 36 hours of best-of-the-best concert footage from Warner artists to raise money for the World Health Organization.

Besides embracing Instagram live and virtual events, UPROXX is also experimenting with TikTok. Although it had been eyeing the platform for a while, it established a brand presence in April and is using the pandemic to learn more about the wildly popular social platform.

UPROXX is also monitoring traffic pattern changes to its content. Instead of spikes in consumption during commuting times, lunch breaks or evenings, its level of engagement is up throughout the day, as people stuck at home seek ways to distract and entertain themselves.

For example, existing newsletters Indie Mixtape and Pop Flash are seeing record open rates of 40-50%. The audience for its streaming-related content has increased 60% since March 15. Its lifestyle section – a hub of content about restaurant closures, beer and grilled cheese pairings and fantasy travel – rose the most, with the audience increasing 135% since the pandemic started.

UPROXX is increasingly seen as an authority not just among followers or cool culture but by Google too. Search referrals have risen 40% as people seek advice about what to watch on Netflix, Prime Video, Hulu and HBO.

The eagerness with which readers gravitated toward UPROXX content during the pandemic hasn’t been matched by advertisers.

Like many publishers, Josephsen described an advertising community that was initially “spooked” by what was going on. Now, conversations have shifted as advertisers tentatively ramp up campaigns.

But before they spend, brands often want guidance from publishers on how best to reach readers. “They are very nervous to look like they’re capitalizing on a down economy,” Josephsen said.

So UPROXX has been trying to be helpful.

“We have taken a human, consultative approach,” he said.

When brands fretted about what to do with their sports advertising dollars or arena sponsorships, UPROXX created a product to reach the concertgoers and sports fans – for when brands are ready to jump back in.

And instead of lunch-and-learns with clients, UPROXX is arranging virtual meetups between ad buyers and musicians, who perform for the small group.

What UPROXX doesn’t want is for the current advertising climate to derail the long-term growth it plans for the brand, Josephsen said. “While revenue might ebb and flow, we’re not taking our foot off the gas.”