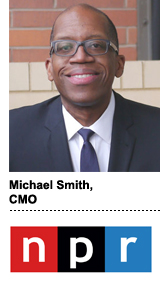 Michael Smith joined NPR as chief marketing officer in April in the midst of COVID-19 and on the cusp of a racial justice revolution.

Both are massive trends that all companies are grappling with right now.

But media companies are also contending with a third giant trend: the shift in how people consume media as audiences skews younger and more diverse, said Smith, whose past experience includes long executive stints at Scripps and Food Network.

“This shift was happening before, of course, gradually, but over the past few months, these issues have gone into hyperdrive – and it’s exciting,” Smith said.

In the past few years, NPR has reinvented its content to appeal to a digital-first audience, primarily with a growing podcast portfolio. The strategy appears to be working: Average monthly downloads are up 24% year over year across all podcast titles.

AdExchanger: I have to be honest, when I think of the typical NPR listener a very specific type of person comes to mind. One of your top goals is to attract new and diverse audiences. How are you engaging the next generation of listeners?

MICHAEL SMITH: As the years went by, you could say NPR evolved into content for more upscale, less diverse people. Perhaps the ’60s hippies and progressives of the 1970s got PhDs and moved to Stamford (Conn.) or Brookline (Mass.).

But NPR came out of a tradition of education and grassroots local journalism focused on celebrating underrepresented voices and telling stories about people whose stories aren’t always told. That is the DNA of public media. So, you could call this a return to our roots.

The good news is that Generations Y and Z are so socially engaged. You can see evidence of that from what’s going on today in the streets. The challenge comes in reaching them where they are. Their parents tend to listen to us on the radio, while they tend to come through digital platforms, like Instagram, YouTube, Facebook and Twitter.

NPR is in the midst of transitioning from a linear radio company to being an on-demand audio and podcast company. What does that mean for you from a marketing perspective?

When we think about the success we’ve had with podcasting, it’s been more evolutionary than anything. NPR was built around our two classic news magazines: “Morning Edition” and “All Things Considered” in the afternoon. We’re able to riff off of those to create our on-demand products.

“Up First,” for example, is a shorter, on-demand version of “Morning Edition.” We also have a new podcast called “Consider This,” which evolved from a short-run podcast we launched about coronavirus news. Now, “Consider This” has become like an afternoon extension of “All Things Considered.” Podcasts like “Planet Money,” “Life Kit” and many others have come out of our radio shows. We’re creating daily habits around downloading and listening on your own time.

From a marketing point of view, podcasts are great for NPR, because they introduce the brand to younger, more digital-first people.

Still, a lot of people listen to NPR on the radio, “Morning Edition” is the top morning drive-time radio show. How are you getting people to tune in when they aren’t driving to and from work anymore?

It’s true that people aren’t driving their cars as much, but we’ve seen that people still want a daily quick download of current events and news to start their day. Now it’s just happening when they’re brushing their teeth or having breakfast or setting up their home office. And the same is true in the afternoon. They want to know what happened during the day when they were on 17 Zoom calls.

We can see this in how podcast listening has increased for us year over year. People are still getting their information, just in a different way. The habit of starting your day in the morning with news and recapping at the end has been persistent going all the way back to morning and evening newspapers. The difference is that now it’s not a newspaper or news magazine, it’s “The Daily” from The New York Times, an Axios podcast or one of ours.

Is NPR evolving the way it monetizes?

Our monetization comes from three primary sources: member stations that pay a fee for access to our content, philanthropy and sponsorships. We’re doing great on the sponsorship side with our podcasts – advertisers really like that the median age of a podcast listener is between 15 and 20 years younger than a radio listener – but we still have some work to do to drive our other two revenue streams on the podcast side, which is something we’re focused on.

What are your other marketing priorities?

No. 1 is building awareness among more diverse audiences which, by definition, are younger and more digitally savvy.

Traditionally, NPR has not invested a lot of money or resources in paid media. We’ve more preached to the choir on our own in-house platforms. Now, we’re doing more paid media and partnerships to get our brand out in front of people.

We did research last year and found that among people of color in the US, our awareness is less than 50%. The good news is, that represents a huge new audience of people for us to introduce ourselves to. And we find that when people are made aware of us, they like us.

Look at something like Tiny Desk, our concert series, which is blowing up on YouTube and has exposed us to new audiences over the past three years. People watch Jill Scott or Taylor Swift or Tyler, the Creator, and they’re surprised that this is coming from NPR. They might say, “I thought NPR was just ‘Fresh Air’ and ‘This American Life,’” but as they dig deeper they see we have a lot of young content and hosts that resonate with them.

What is your paid media strategy?

The strategy is to be where the younger audio listeners are, which means Spotify, Apple podcasts and other digital platforms where people are interacting with audio content. And on social media platforms as well.

Broadly, the position that the social media platforms have taken, that they are simply agnostic enablers of communication, can no longer continue given the power and influence they have. The way our society works, the influence of money is often what it takes to move the needle on an issue. NPR has run campaigns on Facebook in the past.

But our position on the boycott is that we’re a news organization and we cover companies like Facebook, Twitter and Snap. People come to us for unbiased information, and I don’t think it’s productive to actively take a side on something that’s part of our news coverage