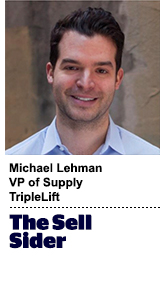 Today’s column is written by Michael Lehman, vice president of supply at TripleLift.

The original promise of PMPs was impossibly compelling: Marry the high CPMs, large revenues and control of direct sales with the efficiency and data of programmatic automation, leading a new and lucrative channel of digital media to be wholly automated.

Publishers transitioned from skeptical to experimental to fully invested, while tech platforms over time built more tools and features to support the unique needs of PMPs. Yet, five years later there is dissatisfaction among many in the digital advertising community that PMPs, as a practice, have underperformed.

Different participants will point to different reasons for this result. There is, for example, an unnecessarily complex and inconsistent set of PMP products across different exchanges, resulting in continued terminology issues and confusion.

There are well-documented operational challenges, including a laborious setup and maintenance process and delivery issues resulting in an abysmally low percentage of deals reaching potential. Additionally, the incentives and expectations between buyers and sellers are frequently misaligned.

And finally, there is a massive oversupply of auction inventory, some of which is outright fraudulent, but much of it duplicative, due to publishers using multiple exchanges, which has been exacerbated by header bidding.

Realistically, all these issues are to blame, but one look at PMPs may suggest that they suffer from a definitional problem as much as an operational one. Despite being considered a sales tool, publishers will readily admit using many of their PMPs to simply skew up indirect CPMs rather than capture unique budgets.

Even standard, easily trumped first-look PMPs – where exchange tags are layered in the ad server – are often a tool for buyers to cherry-pick impressions with the same campaign or spend being used in the auction rather than deploy differentiated budgets to capture unique media.

This reality, and the overall sentiment, suggests that PMPs are being used as more of a yield management tactic than an automation protocol for high-value media that was traditionally sold directly. These deals are easily trumped, require no commitment and, due to their low barrier to entry and lack of standards or expectations, are pervasive. As a result, they frequently require an enormous amount of time and energy, yet many fail to generate value for their constituents.

The rapid adoption of header bidding may help change this dynamic. Header bidding gives programmatic buyers access to the best and earliest user-session inventory and creates efficiency and fairness between exchanges and corresponding DSPs. With this, the concept of exchanges fighting for priority in the ad server goes away and the practice of easily trumped first-look deals should go with it.

In fact, publishers running undifferentiated first-look deals, without applying unique audience, data, placement attributes or commanding unique spend, are potentially running a yield-suboptimal marketplace for themselves. Buyers also have no need to run undifferentiated first-look deals since all buying is implicitly first-look via header bidding, and first-look through one exchange is still beatable by a different exchange in the same auction. At this point, the use case for PMPs becomes highly focused on inventory or budget not available in the auction – a concept that’s been idealized but never fully actioned against in our space.

If we subscribe to this logic, the sheer number of PMPs in our ecosystem would be reduced to a fraction of their previous number. At this point, the infrastructure, skill set and resources we have built around PMPs can then be applied to more meaningful transactions – the type that were previously deprioritized due to the required effort and focus they commanded.

For instance, instead of 150 deals where only 15 fill at more than 5%, publishers can refocus their programmatic sales efforts to consider negotiating programmatic into annual holding company rate cards, guaranteed audience and spend deals, alternative formats and below-market CPMs in exchange for budget guarantees for strategic clients and first-party data.

Consequently, buyers can start pushing real brand spend into the programmatic environment, and all parties can move past a world where PMP performance is optimized against direct-response metrics like CTR.

Ultimately then, when publishers are not forced to manage hundreds of deals yielding minimal results due to ecosystem clutter, they can focus their efforts and energy on private marketplaces that are part of a larger strategy and drive real results for clients, thanks in large part to header bidding helping render PMP “noise” obsolete.