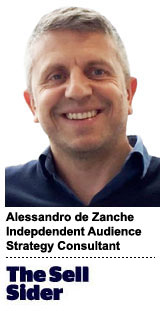 Today’s increasingly enhanced privacy era requires a closer collaboration between media companies and their audiences, based on a true value exchange, trust and transparency. Users who willingly provide additional data in this kind of relationship with brands they trust are a great first-party asset needed for an effective audience strategy.

The limitations of the General Data Protection Regulation (GDPR) make first-party data all the more valuable and crucial for media brands. All media brands have gaps in their first-party data, and they often miss the opportunity to fill them by building additional content assets, such as a new section, microsite or initiative, that can generate different types of data. A new section about real estate, for example, might create the foundation for a segment of people in the market for a mortgage.

For audiences that include European users, let’s not underestimate the power of GDPR’s data portability provision, which allows users to move their provided data between companies. This creates a much more valuable data source than many external data sources.

Unsurprisingly, contextual targeting has become fashionable again due to the way GDPR changed the collection and handling of audience data. In reality, contextual targeting should have always been a strong focus. Context is not just the topic of an article, but a mix between content, reputation and the credibility of the brand publishing it.

Commoditization of context would be a mistake. The differences between media environments can be enormous, as can the value and quality of the engagement between advertisers and consumers. Let’s not fall again for the argument that quantity and reach is more important overall than quality.

In parallel to context, leveraging geolocation technology adds a golden layer to a media brand’s first-party data, especially when geolocation data is mapped to locations of commercial, demographical and behavioral interest. Geolocation data alone can provide a whole portfolio of audience segments.

A media brand should not only own its first-party data but also have full access to it. As obvious as that sounds, it is often not the case.

Many players in the ad tech ecosystem prevent their own clients from having unrestricted access and flexibility in centralizing their own data, either because of technical limitations or parallel agendas.

In a common scenario, a company’s data sets are kept in separate locations. Or an ad tech platform holds its clients’ data and makes it difficult for owners to consolidate it outside the platforms in which it was first collected. Both are a recipe for failure.

Having full availability of one’s own first-party data outside the silos of technology partners’ platforms is paramount for multiple reasons, but first and foremost to build a single customer view.

Not having complete access to a brand’s first-party data also limits, if not prevents, a strategic and flexible use of data science and artificial intelligence for discovery, one of the main keys to successful audience profiling and segmentation.

For example, it’s unlikely that subscribers would declare they are considering canceling. A subscriber’s likelihood to churn can be predicted by behavioral patterns. This type of analysis would be impossible without full access to all the available data sources and a single customer view, enabling the study and observation of correlations and patterns in the data.

Gone are the times when a data strategy simply consisted of placing a data management platform tag on a page, recording a user visit or another basic action, then creating a targetable segment using simple Boolean operators, such as AND, OR and NOT, while ignoring CRM and additional data sources. More importantly, this logic lacks a holistic approach to a user’s profile and activity.

In my experience with media brands, the most effective and successful work was done when user profiles were created by consolidating the data outside technology partners’ platforms. Attributes were independently defined and assigned to unique user IDs that were later uploaded into the DMP or other delivery platforms.

Today, customer data platforms tackle those issues in a cleaner and less laborious way.  Whatever the platform used, it is only a tool to support a strategy and as smart as the concepts and data behind it.

I dream of ad tech and mar tech platforms offering a “bring your own algorithm” functionality, rather than forcing generic algorithms that don’t allow customization and differentiation between the platforms’ clients.

In the end, it’s about people, not data points.

The data of greatest value is often already in-house, so it’s critical that media brands become smarter and more creative when independently extracting it.

Media brands should involve their audiences since the future is about the audience owning its own data. Get ready.

Platforms and technology are just tools; the difference between who wins and loses lies in the strategy.

Media brands will unlikely win the battle individually. They should ally with their peers. And stop being programmatic-centric; programmatic is just one of many channels.

To make their audience and data strategies successful and effective, I believe media brands should steal and reimagine a concept they heavily dislike: the walled garden.

But in the privacy era, their walled garden can be inclusive and built around their own audiences. These “walls” should be a protection from bad practices and reject the naiveties of the past, protect users and their experiences, build trust in collaboration with other media brands and, ultimately, provide full value to advertisers.