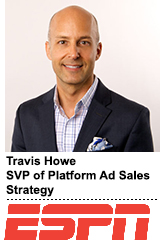 After years of sitting on the programmatic-video sidelines, ESPN is tagging in.

“When I looked at the media landscape, there were very few companies that were not only sitting at the convergence of TV, content and ad sales but had the power to make industry change,” Howe said, explaining why he joined ESPN from Mediaocean a year ago.

Besides opening ESPN to programmatic video, the sports network is expanding where viewers can watch sports. It launched a direct-to-consumer offering this year and plans to introduce livestreams for niche sports ranging from lacrosse to high school. On social media, ESPN produces separate Snapchat and Twitter versions of “SportsCenter.” On Facebook Watch, ESPN created a version of “First Take: Your Take.”

Those efforts allow viewers to watch more ESPN content outside of linear and provide more opportunities for advertisers to place their ads outside the linear broadcast. Howe wants to make it simple for advertisers to buy programs like “SportsCenter” wherever viewers tune in.

All linear and nonlinear inventory will be placed in one ecosystem with unified measurement and a single audience, which Howe calls “platform as a strategy.”

Eventually, that single platform approach will extend beyond ESPN and across Disney, creating an ad platform with massive scale that could get even bigger when Disney buys Fox. Disney reorganized its business in March to make it easier to deliver on that platform-focused goal.

Howe talked to AdExchanger about how ESPN is navigating the convergence between digital and TV.

AdExchanger: What does programmatic mean to ESPN?

TRAVIS HOWE: We have spent the greater part of my tenure here over the past year asking ourselves that. We have been deploying programmatic solutions on the display side for some time, but [have] been reserved in doing it for video until we truly understood what it meant for our ecosystem.

Programmatic means everything from automation to reaching targeted clusters of audience strictly through technology in addressable format, and variations of that in the middle. Internally, I look at it through a spectrum of five.

Programmatic is also a new sales channel. We know dollars are moving to programmatic video, and we’ve formed partnerships that let agencies get access to that inventory.

We are taking a strategic approach to programmatic, with two to three programmatic video partners, not tens or hundreds. We are evaluating demand and figuring out what partners are best for our needs. And if you look at our competitors, that’s a very small number [of partners].

What does AT&T, WarnerMedia and AppNexus coming together mean for ESPN?

We are readying ourselves for a future where we use data to reach audiences at scale, across linear and nonlinear, with content continuing to be the centerpiece.

With the reorganization of the Walt Disney Co., particularly from an ad sales perspective, we are bringing together the power of Disney, ABC, Freeform and ESPN into a single business unit.

We need to be better positioned to allow our advertisers to access those audiences at scale with our content, supported by our technology partnerships, in a way that still allows them to get the best in sports – but will also allow them to reach those same audiences across the Walt Disney portfolio.

What currency or currencies do you use for campaigns that span different channels?

That’s a question I’m contemplating every day, and one I’ve thought long and hard about. Does a single measurement remove the uniqueness and power these platforms bring to the table? For example, the KPIs a Twitter can deliver are different than the KPIs that our app can deliver.

There is need for a measurement to make them all relatable. But I think it’s critically important to evaluate the unique KPIs that every property brings to the table, whether it’s an app, social platform or live engagement platform.

What does that approach mean in practice?

You could apply a single CPM across the board. But from a delivery perspective, we would still track the unique engagement metrics each platform brings to the table –whether it’s conversations, retweets or time spent – that also deliver value back into the deal beyond a standard CPM.

Does the current technology for video everywhere limit what you can do?

Underlying technology will always be a challenge in the industry. Right now, the vast majority of publishers manage their television business with WideOrbit, Sintec and Mediaocean and run their digital business off a different set of tools: Operative, Freewheel, DoubleClick, just to name a few.

When you create more ubiquitous video opportunities, at some point the deal starts to break into individual systems. We are always exploring how to create more unified technology platforms, not just at ESPN but across Disney.

For so long, TV has been separate and distinct from digital. Step one is a tech layer that at least lets you bring TV and digital together at the account and deal level – maybe not at the execution and traffic level.  At some point, the deal needs to come back together from a measurement perspective to deliver a single view of that deal.

Is it challenging to slot ads into livestreams?

A significant portion of our digital content is live, which makes us distinctly different from our competitors. Livestreaming is different from VOD, where you know what the ad breaks and durations are. In the livestream, you have to fill a very specific duration of time.

Within that time, you need to do dynamic ad insertion (DAI) to make the numbers work. You could have two 15-second spots and a 30-second spot and be left with five, six, seven seconds before the show starts again.

Do you want to build or buy?

We are a hybrid. A lot of it has to do with the current capabilities in the marketplace, and do they meet our needs. We have livestreaming content, and that’s a particularly unique need not a lot of other publishers in the marketplace have. We are always talking to vendors about how they can better support our needs without building from scratch.

What does buying a program across nonlinear and linear do for reach and frequency?

Before we even went to market for advertisers to buy a single program everywhere, we did research to find out if you were reaching the same consumer everywhere. We identified that the consumer may be from the same demographic group, but they are different individuals.

Especially for men 18 to 34, if advertisers are just buying linear, they are missing out on a good portion that are just watching on a digital platform.

In the display world, some saw programmatic as a “race to the bottom.” Where do you see the risk and opportunity in programmatic?

But we learned that agencies were asking to have programmatic as a monetization, but it wasn’t an ask to get cheaper CPMs, but to automate the workflow or bring new data to the table. [Programmatic] display is different, because so much inventory is out there. In video, there isn’t a ton of supply, and there isn’t much content that drives the kind of tune-in we get, especially with our livestreaming.

ESPN offers emotion-based buying to advertisers. How is that going?

We launched that two years ago, and it’s gone through an aggressive transformation. Sports are emotional. We know who your favorite team is. If your team wins or loses, you are in a different state of mind and that influences brand behavior and purchase intent. We send targeted ads during very specific moments in sports.

Is it ever good to buy ads when a team loses?

You would be surprised at some of the emotional outputs that come when your team loses. If I think of my own fan behavior, I’m more inclined to gravitate toward junk food than I would be if my team won.