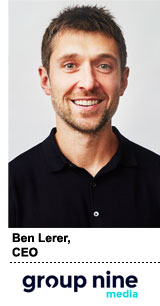 Lerer embarked on this strategy more than a year ago when he created Group Nine Media. The holding company is composed of Thrillist, The Dodo, NowThis Media and Discovery’s Seeker, with $100 million in funding from Discovery Networks, the company that acquired Scripps Networks Interactive this year.

Now Lerer is focused on reducing Group Nine’s reliance on advertising revenue through program sales. Group Nine has sold shows to Facebook Watch, and it just landed its first digital-to-TV deal: “Dodo Heroes,” a show on Animal Planet that will feature people who go to huge lengths to save animals.

To speed program development and licensing deals, it acquired 35-person production company Jash in November. Lerer then raised $40 million more in capital in December – just to have around, he said.

“Raising this money was a non-event,” he said. “I don’t want to be worried about short-term financing. Things are going well, and we had the opportunity to raise more capital.”

Lerer doubles as an investor, through Lerer Hippeau Ventures, so he’s both a stakeholder and a competitor to big media brands like BuzzFeed.

He talked to AdExchanger about Group Nine’s future and the future of digital media as many try to replicate the cable TV model by securing revenue from distributors to create content and by selling digital advertising.

AdExchanger: With lots of negative headlines for publishers, from BuzzFeed’s and Refinery29’s layoffs to Mashable getting sold and companies missing revenue projections, what is the through line here?

BEN LERER: BuzzFeed, and, to a lesser extent, Refinery29 falls in this bucket, are generationally important brands, with the business growing fast. When you are doing that, you make some really smart investments [as a publisher], and you do some stuff that doesn’t work. It’s an inevitability. Then you take inventory and make course corrections.

The fact that they are doing their first layoffs after a number of years – if anything, I would argue they should have done this a long time ago. And there’s nothing in the business that’s hyperproblematic. The expectation is that they are going to grow at the speed of a Silicon Valley technology company. They put that pressure on themselves, and others put that pressure on them.

When investors compare your business to those drawing negative headlines in Q4, how is your balance sheet different?

Part of this is building brands for this new world: brands that are most comfortable living on other distribution platforms versus businesses that have one foot in the past and one in the future, that have a business model where display advertising is a majority of ad revenue and then they go out to build distributed scale. We are lucky that we don’t have a lot of that legacy display advertising business – our business is a video business.

Are you seeing your decision to consolidate into a holding company validated in the market?

Being a small or medium-sized digital media business in the wild is tough right now, the same way it’s tough to be a cable network or newspaper. We saw consolidation coming. Since [we formed Group Nine], we’ve seen AT&T-Time Warner, Disney-Fox and Discovery-Scripps Networks, Verizon-Yahoo-AOL.

I would say we were right, and by creating a holding company we got out ahead of this. Now, that puts us in the position to be a buyer, not a seller. As these digital media companies that are singular brands are out floating and figuring out where they are going, a la Mashable, it’s nice to be on the buyer side. And access to extra capital never hurts in that regard.

Since you bring up Mashable, did you look at acquiring Mashable?

I looked at the book. We have a very particular set of qualities that we think are Group Nine qualities. Mashable has some of them, and it doesn’t have some of them. Regardless of what I think of the Mashable brand and business, it wasn’t even close to being a fit for us.

It’s hard for people to identify what Mashable is. When brands have to grow, they end up growing unnaturally and rationalizing why they covered Donald Trump when they were supposed to be about tech.

That’s something you can avoid when you have a holding company, because you don’t have to be all things to all people.

Second is platform revenue. [BuzzFeed CEO] Jonah [Peretti], in his letter about the state of his company, was very transparent about the amount of distributed revenue he has right now [$52 million in 2017]. He made it very clear that he is frustrated with the speed at which platforms are developing business models that allow publishers to thrive on their platforms from a financial perspective.

He’s not wrong that it can be frustratingly slow. I’m not in agreement with him that the media business is in crisis, although I do think there are going to be a lot of companies in crisis.

Third, in the medium and long term there will be a spectacular opportunity in program sales, which is selling shows to Facebook Watch or Snapchat. That’s why we bought Jash. It’s about IP creation.

What are the franchises we can build that are sticky, highly monetizable and internationalizable? TV has been built on that model forever; you built shows. Digital is built exactly the opposite way.

What’s the growth opportunity for each revenue area?

There is a lot of scalability within all three of those buckets of revenue. Program sales, in particular, is self-reinforcing. The idea that you have programming underwritten by platforms and getting help with distribution reinforces your brand. You’re making more great content, and you’re not funding it out of ad-supported P&L. That in turn drives your ad business because your brand and audience gets better.

Has the scale created by shifting to the holding company model opened up any new opportunities?

It’s helped our relationships with the platforms. They look at us differently than they would an individual brand. We have a different seat at the table.

It wasn’t about cost savings, but about knowledge sharing and being a larger, more meaningful partner to advertisers who want fewer partnerships. It was about having more data and being able to weaponize that data for teams internally in smart ways.

What’s been your sales approach as a holding company?

We have one team that sells all brands across all platforms. Within that, there is specialization and people who have more comfort with pieces of ad product or different brands. That’s the whole secret to running a holding company and conglomerate: figuring out the balance between what is corporate and what is brand.

Each brand is in a different stage of growth, with different leadership and priorities. You can never take your eye off that; I don’t care if you’re Viacom or Facebook. Figuring this out is not a spreadsheet, it’s a human exercise.

With fake news and Russia and with the stock market not being awesome to Snapchat, it puts pressure on these businesses to make changes more quickly.

Long term, all of these platforms will require really good content for their advertising businesses to take the next step, which is access to TV advertising. There is not a question that part of the growth strategy [for platforms] is to take TV money. To do that you need video that is engaging and – the definition of premium is probably changing – but premium.

We are fortunate that there is competition among all these platforms as we figure out what that looks like, and we are platform-agnostic creators.

When are you going to grow the holding company by buying another publishing brand?

I start with the founding team: Do they share our values? I can’t just do an asset-based market analysis and be people-agnostic. It’s people first, then finding brands that fill white space for us.

We reach 81% of people in their 20s in the US. Is the strategy to get the other 19%? Or to look at what other areas of lifestyle are on the rise? It’s a good time to be a buyer of small or mid-size independent brands.