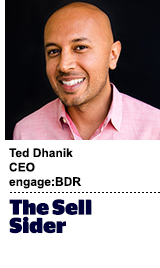 If you are not part of the duopoly, it is a tough time to be a publisher. Reputable media brands are struggling, so you can imagine where that leaves the long tail of publishing.

A big and expensive issue is float. Typically, brands and agencies do not pay for their ad buys until 90 to 180 days after the impressions run. Publishers are forced to use factoring or borrow money to manage their cash flow.

Cryptocurrencies could be a way to get publishers paid immediately, at the moment the ad is served. Publishers could then either trade that currency on various exchanges to advertise themselves, invest it or, perhaps, trade it in for good, old-fashioned money.

Eliminating the need for float would reduce overall costs for publishers and drive efficiencies. These benefits would be coupled with the advantages of a transparent payment ledger, which allows everyone to see where the money is really going and whether or not third parties are involved. IBM iX teamed up with Mediaocean to create one of these blockchain networks to increase transparency in media deals. This transparency should reduce some ad fraud and give advertisers and publishers more confidence in the digital advertising ecosystem.

This is a twofold approach that has the potential to also solve many of the transparency issues currently plaguing the marketplace. Buyers would see all actors involved in the supply chain and receive trustworthy bid data directly from publishers, reducing occurrences of fraud. Publishers stand to gain access to actual bid prices from buyers. This kind of access gives publishers a better understanding of margins taken from middlemen, the ability to understand who is serving ads on their inventory and, lastly, a fully transparent ledger that allows for immediate reconciliation of delivery.

There are some cryptocurrencies already on the market that are designed with elements of this in mind, but whether they can scale remains to be seen. For example, AdCoin launched its AdCoin crypto advertising platform on May 1. To help increase adoption, it created plugins for WordPress and WooCommerce, two systems widely used by website developers. AdCoin is designed, in part, to help publishers profit from microtransactions without paying credit card transaction costs, which can be prohibitively high. The idea appears solid, although its success depends on the right people and companies adopting it.

Steemit, a social media platform that launched in 2016, allows people to reward content creators with a cryptocurrency token that can be traded on the crypto market. Steem, the blockchain-based rewards platform that powers Steemit, announced last fall that it wants to let publishers in on the action. The idea is that publishers big and small can create their own smart media tokens (SMTs) and use them as an alternative to paywalls and subscriptions to monetize their content.

Steem describes SMTs as “like Ethereum’s ERC-20 tokens, but with certain built-in ‘Proof-of-Brain’ properties and a token distribution reward system designed specifically for digital content businesses.” Proof-of-Brain is a type of rewards algorithm that encourages people to create and curate content. Steem also positions its currency as being easy to set up, even for non-cryptocurrency experts. SMTs will launch sometime in 2018, according to the website.

The Basic Attention Token (BAT) attempts to address consumers’ concerns about advertising and improve advertising for marketers and publishers. The concept was created by Brendan Eich, the co-founder of Mozilla and creator of JavaScript and Brave Browser, an ad-blocking browser.

BATs integrate with the Brave platform. Users can allocate BATs to publishers and YouTube creators, but relying on the kindness of their audience might not strike publishers as a sound monetization strategy.

I think the cryptocurrencies with the most potential to change digital advertising will be ones that are designed to integrate with a wider number of browsers. Successful models will probably also shy away from all-or-nothing approaches, meaning that publishers won’t have to forsake traditional payment methods to use them.

The need is there. The technology is there. Now, all we need is a cryptocurrency that both the supply and demand sides will feel comfortable adopting – and quickly.