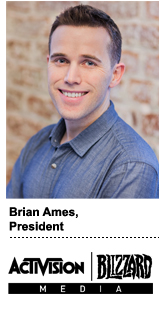 Engagement with games is up during the pandemic, but it’s not only because people are looking for a way to kill time.

“Playing games is stimulating but also cathartic,” said Ames, a long-time Candy Crush devotee. “And that connects to the engagement we’re seeing, especially with Candy.”

In Q1, Candy Crush grew its monthly active users both year over year and in each month of the quarter, with double-digit growth in March.

But there’s a flip side to that coin: Although King’s ad business grew more than 75% YoY, growth decelerated substantially in March before moderating a bit in April.

AdExchanger spoke with Ames, who joined Activision Blizzard Media in 2017 after three years as director of revenue at Snapchat.

AdExchanger: What games do you play and have you found yourself playing more while sheltering at home?

BRIAN AMES: I was a heavy Candy Crush player long before I became an Activision Blizzard employee, going back to the Facebook days. I stuck with it when it migrated to mobile. I’ve played Original, Jelly, Friends and I still play to this day. I dabble in other games, largely to experience and understand them, but nothing has ever kept me as captive as Candy Crush.

That said, I wouldn’t say I play more now, actually, because I’m not commuting – and I have two small kids. But my partner and I both still play mobile games while we’re watching Netflix.

What is Activision Blizzard Media in a nutshell?

We focus on developing offerings for the demand side and the supply side while maintaining a player-centric mindset. Most of our product, engineering and data science focus is on creating tools and solutions that allow our game-makers to integrate ads more efficiently, effectively and at scale. We also provide reporting, metrics and underlying technology to mediate different forms of demand to optimize the ad experience and optimize revenue.

On the demand side, it’s about connecting these ad experiences to the right audience by, for example, optimizing the number of people who opt in to rewarded video. We also have a really robust research and measurement function that helps brands and agencies understand how to connect to gaming audiences.

How are you expanding your work beyond King into the wider Activision Blizzard universe?

We launched advertising in Call of Duty: Mobile in Q4 of last year, which introduces a new audience and context for advertisers that want to reach a male-skewing midcore gaming audience. But, as with King, we’re taking a deliberate approach to understand what works and where the opportunities are before we do anything. We don’t want to rush things. We aren’t doing direct sales for Call Of Duty: Mobile right now, for example. We’re waiting until we feel like we have the right level of reach across that audience.

On the esports side, Activision Blizzard forged a relationship with Google earlier this year that includes a YouTube partnership for live streaming and VOD esports content. We’re going to be a part of that, helping buyers connect to an esports audience, which skews toward 18- to 34- [year-old] male cord cutters.

How are you helping Activision Blizzard convert players into payers?

We’re getting more sophisticated in how we manage the point of intersection between people who make in-app purchases (IAP) and those who monetize through exposure to advertising. We’re very cautious about who sees ads so as not to disrupt the IAP part of the business or the game experience.

We do A/B testing to understand the impact of different ad experiences for different audiences, but we’re still learning the balance. We want to use ads as a vehicle to support quality in the game, not detract from it. It’s a topic of daily conversation for us.

How is King dealing with advertisers halting their spend during the pandemic?

Over the years, we’ve worked to broaden our advertiser reach in terms of direct conversations with agencies and brands across verticals. COVID-19 is causing some brands to pull back while they take stock of their business, but there are also some brands that are leaning in, and we’re trying to mirror those areas of opportunity. Over the last six to eight weeks, we’ve actually seen more engagement in certain verticals, including entertainment, streaming services, technology and select companies in CPG.

What differentiates you in the market in terms of data, targeting and programmatic?

We have all of the table stakes targeting that brands and agencies expect, and we also made sure early on to connect to programmatic channels as a way for buyers to reach our audiences.

Beyond that, most of our focus is on ensuring that the audience is engaged and on expanding the volume of that engagement, meaning that we prioritize growth over microtargeting. The brands and agencies we work with tend to want to reach as many of our players as possible, and that usually means targeting by age and gender.

But we’re also investing in our capabilities on the publisher side to better manage and control the deployment of advertising across our audience for frequency, type of placement and the way in which demand is mediated to maximize revenue for our game teams.

Do marketers get the gaming audience?

We have an opportunity and, in some ways, a responsibility, to educate the market about the gaming audience. We’ve done ethnographic research about the gaming habits of different groups of people.

Take moms, for example. Folks often have misconceptions about female gamers, and certainly mom gamers. But we’ve found that more than two-thirds of moms say they engage with video games, and that 43% of moms play across platforms, including console games and PC games, rather than solely mobile games and casual games. A stat like that is eye-opening and reinforces just how broad gaming is and how it’s applicable to so many people.