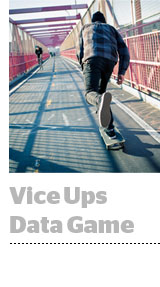 As the media brand increased its data team from one to three data scientists, Vice knew it needed to collate its sources and automate the work to bring those sources together. Vice’s data team could then shift its focus from organizing data and responding to ad hoc requests to generating insights proactively for the executive, sales and finance teams.

“We wanted our executives to have actionable insights on a global scale,” said Jay Glogovsky, Vice’s director of revenue operations since last fall.

Vice also wanted to create predictive models to forecast revenue and advertising inventory. To accelerate this transition, Vice abandoned doing the data operations work itself, which would have taken six to nine months. It is difficult to extract data from many of the sources Vice and other publishers use, adding to the difficulty of bringing them together.

“Even some of the most well-known programmatic demand sources don’t have a functioning API,” Glogovsky said. “Ideally everyone has a robust API with the same data fields, but that’s not the case.”

Instead, Vice turned to Switchboard Software, a software-as-a-service data operations platform specializing in the time-consuming work of unifying data sources. Vice initiated a pilot program last year that brought together a few of its most critical data sources in two weeks.

With basic data management covered, Glogovsky’s team was able to build two types of predictive models. It can now pass on real-time revenue reporting to different parts of the business globally. The reports include predictive elements, allowing teams to forecast revenue.

Vice operates in three dozen markets, and the satellite markets benefited the most from the automation. “Our global team has insights that no one has seen before,” Glogovsky said.

And Vice also built an inventory management tool with predictive capabilities that is used by the sales team. The tool shows how many ads can be sold in an upcoming month, what’s still available and the sell-out rate. After the pilot program finished, Vice worked with Switchboard to add its viewability vendor so the sales team also could forecast viewability.

“Everything on Vice is viewability first,” Glogovsky said. “Giving our advertisers the best possible [viewability] performance would not happen without taking all these fragmented data sources and bringing them together.”

Vice’s next project will analyze what types of ads are resonating with the marketplace and its audience.

“Vice does native the best,” Glogovsky added. “But what is the next product we can offer that resonates with users and also provides real sales and awareness for advertisers?”

Vice will also continue to monitor blind spots in its data and add them where possible. Since the 2016 two-week pilot with Switchboard, it’s onboarded more data sources, but newer social platforms like Snapchat remain difficult to access and incorporate into its platform. And others “have their unique quirks,” Glogovsky said.

Sponsored content is often tagged and tracked in an ad server, but it can still be difficult to bring in that data.

“There is a lot of heavy lifting with sponsored content, and we are vetting ways to get better – what sponsored content works best and automating it using the data operations team we have in place,” Glogovsky said. “That’s the next step in the evolution.”

Vice sees itself an early adopter of this type of holistic data management. Glogovsky expects other publishers follow soon because investing in data operations will be critical as audiences become more distributed.

Publishers that don’t invest in bringing together different data sources will be disadvantage, Glogovsky said.

“They are not going to be able to scale,” he said.