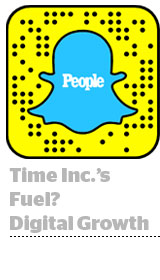 Time Inc. is bullish on digital, even as its print business deflates.

The company – which has lately been the object of acquisitive interest from Meredith and other suitors – expects $600 million in digital revenue next year. “We see a path to $1 billion over [our strategic] plan,” said CEO Rich Battista during Time’s earnings call Thursday.

By acquiring Viant and Adelphic, Time Inc. has been able to spur digital growth. Digital advertising revenues grew 63% in the fourth quarter. Without Viant, it would have grown just 15%.

Revenue from Adelphic, acquired in January, will show up in the next quarter’s earnings. It should be noted that cost of revenue for Time’s ad platform business includes “pass-through” costs paid to outside publishers, and therefore is certainly higher than that of its owned and operated media sales.

Battista highlighted Adelphic as a way to “bolster Viant’s people-based marketing” through its self-service media planning and execution tools. Time Inc. said its own properties reach 60% of the US population every month, and the company grew its audience 13% to 129 million by the end of last year, according to comScore.

Native revenues doubled in 2016, and first-quarter bookings have Time Inc. convinced they will double again in 2017. Time Inc. worked with more than 400 advertisers on native programs.

The company has launched new brands to drive further growth in video. Coinage, with Geico as a sponsor, will develop 600 personal finance videos across 22 Time Inc. sites in its first year. And OTT app PEN extends Time Inc.’s presence into smart TV with celebrity and lifestyle content from People and Entertainment Weekly. Users are already spending 30-40 minutes per day on the app.

But print still dominates the company’s balance sheet, accounting for two-thirds of advertising revenue: $343 million out of the $509 million posted in the fourth quarter.

Within five years, Time Inc. is projecting to return to growing its business overall. This year and next, however, business will be flat.