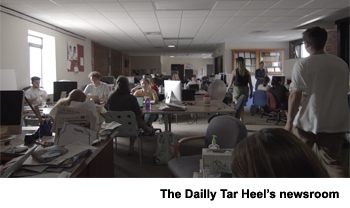 College-age consumers shouldn’t be too hard for advertisers to find, since many are, not surprisingly, on college campuses.

But most college newspapers don’t have a systematic way to sell their inventory. Student-run outlets generally have reps to pound the pavement, visiting small businesses – their bread and butter – one by one to drum up ad sales. Trafficking the creative and doing follow-up like verification, billings and collection are clunky, manual processes.

That was the case for years at The Daily Tar Heel, the independent paper of the University of North Carolina at Chapel Hill, which is almost entirely funded by advertising and circulates in print and newsletter form to around 10,000 students.

“We had a lot of different old legacy systems stacked up on each other and cobbled together with Google Docs and spreadsheets to try and make solutions that could work for both print and digital ads,” said Erica Beshears Perel, general manager at The Daily Tar Heel for a little over a year and former editor-in-chief of the paper 20 years ago when she was still a student at Chapel Hill.

Until recently, there was even a piece of software that could run on only one of The Daily Tar Heel’s computers and couldn’t be accessed remotely, and another system that wasn’t able to export spreadsheets.

Those old systems created an unsteady foundation as The Daily Tar Heel’s revenue mix, once 95% print, shifted to digital.

A few years ago, The Daily Tar Heel started working with flytedesk, a Colorado-based startup with a national ad network for college media and automated tools for buying it.

In some cases, aggregating college inventory in one place helps draw national ad dollars, which can be hard for school pubs to come by, even large universities like UCLA, for example, which was able to attract Trojan Condoms as an advertiser through the flytedesk platform.

The Daily Tar Heel isn’t at that point yet. For now, it’s using flytedesk to streamline its ad sales with local advertisers and has even collaborated with flytedesk to develop a self-serve tool called Ad Shop released last July that reduces the friction for SMBs looking to buy college media, a bit like AdWords but for colleges.

It’s low-hanging fruit that’s just there for the picking.

When flytedesk CEO and founder Alex Kronman was a college student in Colorado, he sold ads for the school paper, and one of the hardest parts was just getting his foot in the door – and that’s “not necessarily a revenue-generating activity,” he said.

“If you can mitigate the amount of time it takes to make contact and do paperwork and maximize the time spent consulting with mom-and-pop shops or franchises, that relationship can turn into a partnership,” Kronman said.

The Daily Tar Heel also uses flytedesk to more easily package up other inventory for buyers, including newsletter sponsorships, sponsored content and out of home. The paper recently launched a brand studio that provides creative and marketing services for advertisers and represents a “slow but growing chunk of our revenue,” Perel said.

And an automated systems makes multi-platform campaigns less tricky to sell, she said.

“If the ordering side is easier, you can spend more time working with the client,” Perel said. “Our advertisers have more options and our ad revenue is steady.”