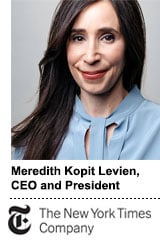 Meredith Kopit Levien will assume the role of CEO and president of The New York Times Sept. 8, the company said Wednesday. She will succeed Mark Thompson, who has served as CEO since 2012. Read the release.

“I see a big opportunity to expand journalism’s role in the lives of millions more people around the world, and to invest in product and technology innovation that engages our readers and grows our business,” Levien said in a statement.

Levien joined the Times as chief revenue officer in 2013, one of Thompson’s first big hires. She previously spent five years at Forbes, where she pioneered its branded content offering, BrandVoice.

After first heading up the Times’ advertising business, she took on a dual role that made her responsible for both advertising and subscription revenue. The position allowed the Times to shift from a mostly ad-supported to a mostly reader-supported publication while minimizing conflict between the two sides of the business.

She then stepped into the even more senior role of EVP and chief operating officer in June 2017.

In February, Bloomberg reported that she was going to be named the next CEO.

Thompson said he chose to leave on a high note: “I’ve chosen this moment to step down because we have achieved everything I set out to do when I joined The Times Company eight years ago — and because I know that in Meredith, I have an outstanding successor who is ready to lead the company on to its next chapter.”

Levien will earn $900,000 in salary in the role, with an annual incentive plan targeted at 100% (but up to 200%) of her salary, according to an SEC 8-K filing accompanying the news. She’s also eligible for long-term incentive bonuses which could amount to $2.6 million for the period of 2020 to 2022. The terms of her current contract will run for just over two years, ending Jan. 1, 2023. She will also join the Times’ board.