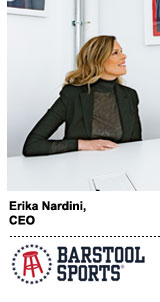 Lately, one of the most popular pieces of apparel worn by professional football players and coaches is a t-shirt featuring NFL Commissioner Roger Goodell wearing a clown nose.

It’s a blatant sign of disrespect, and a popular way for people to signal their opinion of the unpopular NFL exec, particularly after he makes a controversial decision.

Of course, that shirt isn’t official NFL apparel. It was created by Barstool Sports, an irreverent publication whose articles and events aren’t often paragons of good taste.

For instance, on Friday right before Super Bowl weekend, Barstool Sports is launching “Super Brawl,” a $15.99 pay-per-view stream of an amateur boxing match. Among the highlights: one of its employees will enter the ring to fight a guy from the comments section.

A real-life Fight Club for the average sports Joe is an amazing premise for Barstool’s fans. For CEO Erika Nardini, it’s further proof that Barstool Sports is a next-generation media brand.

“We are in a relationship economy,” she said. “I believe that influencers are the new publishers.” Her job is to monetize those relationships in a way that feels natural to Barstool’s readers.

Fans not only open their wallets for $15.99 boxing streams and funny t-shirts. They’re buying $100-per-year subscriptions to “Barstool Gold.”

The group follows their favorite personalities on social media during games, watches recaps and listens to podcasts peppered with ads for products its staff believes in – liquor, beer, donuts, sports betting and frozen dinners.

The relationship between Barstool and marketers goes beyond the typical publisher-advertiser relationship.  Advertising and editorial have been “merged,” Nardini said. “We are very overt when we are marketing a product, and honest we are promoting something. “

For instance, leading up to the big game, the Barstool crew road tripped down to Atlanta, where the Super Bowl is taking place, in a tour bus stocked with Kraft’s Devour frozen meals. They’re recording podcasts and videos in a house with New Amsterdam Vodka flowing like water. They’re recording six hours of radio per day leading up to the game, sponsored by Bud Light.

Advertising accounts for between 30% and 40% of overall revenue. Within that portion, podcasts bring in a third of its revenue. The majority of revenue comes not from sponsorships, but from commerce.

The model of fewer, more passionate fans also means that Barstool Sports isn’t worried about offending a broader audience. But even influencers like PewDiePie faced backlash over racist, anti-Semitic and insensitive posts. Barstool Sports’ content draws criticism for promoting cyberbullying, sexism and misogyny. Is there a line that Barstool Sports won’t cross?

“There is definitely a line. We don’t support hate speech, racism, misogyny,” Nardini said. “I think the perceptions of Barstool’s content are overstated and overblown, and created by people who don’t read and watch what we create.”

While Barstool Sports’ content is more or less extreme depending on the platform or its intended audience, she said, even that doesn’t always work. Facebook pulled one of its boxing videos for violence, and removed a blog post “too sensational for the platform,” she said.

“We’re platform agnostic,” she said. “The challenge with influencers is that they don’t own their data, they don’t control monetization and they are mostly beholden to the platform they were created on.”

Because of its multiple touchpoints, Barstool Sports even incubates influencers – like a duo of women Barstool plucked from Twitter and gave a sex advice podcast “Call Her Daddy” that grew from 12,000 to 2 million downloads in two months, Nardini said. “We can use our platform to make incredibly talented people really big.”

Barstool’s success comes as more media is balkanizing, and influencers are grabbing more attention and advertising budgets. Content delivered with an opinion, in a distinct voice – including one that alienates others – wins over bland stats about touchdowns that might as well be delivered robotically via Siri.

Other media brands facing the rise of niche, personality-driven brands like Barstool not only have to think about how to create a community through their content, they must develop expertise in building a consumer brand, not a B2B brand.

“When your monetization is singular and mass, your company’s muscle memory gravitates toward that – managing programmatic and running pre-roll,” Nardini said. “The muscle digital media companies don’t have it creating a strong point-of-view and a way to monetize that feels accretive to fans. I’m at our Super Bowl house right now, and surrounded by people wearing our t-shirts and sweatshirts. They are part of something.”