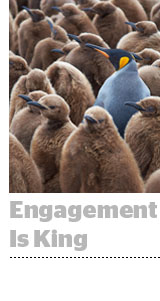 HuffPost overhauled its audience strategy last year to super-serve its most faithful readers and increase their numbers. The publisher is also diversifying its revenue through subscriptions. In April, it soft-launched a membership program called HuffPost Plus, its first attempt at generating revenue from those users.

Facebook’s and Google’s unreliability as sources of traffic drove this switch to engagement. “It had grown harder and less lucrative to pursue undifferentiated scale,” Jennifer Kho, director of strategic innovation at HuffPost. “We don’t control those platforms or their algorithms. What we can control are our relationships with our readers.”

As part of its focus on engagement, HuffPost had to reorient how it collected data and measured success.

For the first half of this year, HuffPost stripped out “drive-by traffic” from readers that visited only a few times a month and instead looked at page views from loyal readers, coupled with time spent with the content.

The newsroom needed to better understand what stories engaged regular readers and how to serve better content that kept them coming back, Kho said. A single piece of successful content can pay dividends. A news story that resonates with regulars can be the foundation for more analysis and service pieces from HuffPost reporters, and personal stories from contributors.

HuffPost also developed a plan to turn its casual readers into regulars.

It created a readership funnel, dividing its readers into five reader groups: fanatics (nearly every day), loyals (most days), actives (close to twice a week), occasionals (weekly) and tourists (a few days a month). HuffPost plans to move each reader cohort down the “FLAOT” funnel.

Over the past three months, HuffPost has grown its engaged reader group (fanatics, loyals and actives) by 10%. Actives grew the most overall, rising 13% – a sign that it’s moving casual readers to the more active group.

In addition to viewing readership data through the lens of engagement, HuffPost is running its own tests. It’s conducting reader surveys and focus groups, and analyzing reader behavior to understand how to increase engagement and get those engaged readers to become subscribers.

For example, it’s already learned that its most fanatical readers are more likely to visit its homepage, leave comments and sign up for newsletters.

HuffPost’s highly engaged readers consumed 5% more content over the past three months. The value of those fanatical readers is high: The top 6% of readers contribute 60% of its page views.

“The people who were highly engaged are also more likely to come regardless of the news cycle. They’re already contributing more to our advertising revenue because they are engaged and loyal,” Kho said.

To draw in more engaged readers, HuffPost has organized its coverage around topics it thinks it can cover better and more deeply than anyone else, like “social justice,” “black voices” or “queer voices”.

“We want to be news for people who are not necessarily elite, and don’t necessarily see themselves as part of the power conversations,” Kho said.

Because HuffPost wants to be the news for the non-elite, it’s not in favor of building a paywall.

Instead, the most basic “subscriber” membership starts with an email address. HuffPost’s highly engaged readers consumed 5% more content over the past three months. The value of those fanatical readers is high: The top 6% of readers contribute 60% of its page views. “Supporter” ($5.99 per month) and “Super Fan” ($99 per year)  come with bonuses like members-only newsletters and t-shirts. The Guardian-style membership isn’t a paywall, but about supporting journalism that matters to its readers.

Even as HuffPost drills in on engaged readers, it’s not giving up on casual readers, because it needs to fill the top of its loyalty funnel. Content is still distributed on social platforms and shows up on top of search results. Every story is an “ambassador” for the HuffPost, Kho said, as it tries to convert casual readers to regulars and regular readers to members.