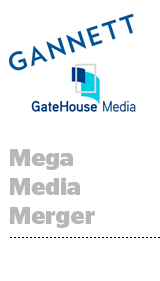 If all goes according to plan, America’s two largest newspaper chains will become one by the end of the year.

If antitrust regulators approve the merger, GateHouse brings 154 daily local papers across 39 states to the table, and Gannett’s got 109 local pubs in 34 states. Together they’ll have a combined reach of more than 145 million monthly unique site visitors – and own one out of every six papers in the United States.

The dust is still settling, but here are three main takeaways to keep you up to speed on the deal.

If you own print publications, particularly local ones, the last decade has left you reeling. US print ad sales will decline by 15% this year, according to Magna Global’s summer 2019 updated ad forecast. Globally, print net ad revenue will decrease by 10% to $51 billion.

And many publications are looking at digital to be the savior.

New Media chairman and CEO Mike Reed told investors during the company’s earnings call on Tuesday that the Gannett/GateHouse transaction will help both parties accelerate their digital transformation process to “become an important digital media player and a stronger partner for advertisers and small businesses.”

But that’s a lot harder than it sounds. On the whole, Magna found that publishers haven’t developed their digital ad sales to the point where growth in that area will be enough to offset the erosion of traditional formats.

Still, Reed said that New Media anticipates that the combined company will realize between $275 million to $300 million in cost savings (cue layoffs) annually within two years of closing the deal. Roughly 25% of the merged entity’s revenue will be digital.

New Media is forecasting $4.3 billion in annual revenue for the combined company and expects that digital advertising and marketing services revenue will hit more than $1 billion annually.

The newspaper industry has been complaining for years that big tech companies, Google and Facebook in particular, get content for free and drum up billions in ad sales off the back of it.

Throwing in stakes together could give Gannett/GateHouse an edge in the seemingly never-ending not-so-cold war that publishers are waging with the tech platforms.

Reed didn’t share details, but noted that the scale and cash flow that New Media is looking to generate on a combined basis should give it the ability to invest in their digital business and, possibly, have a little more weight to throw around in negotiations to get Google and Facebook to pay for content.

“Stay tuned on that,” Reed said.

Investors aren’t on board

Although Reed touted the potential to “reposition both companies for long-term growth and, importantly, to support quality journalism,” the market was less sanguine about the prospects of this mega media merger.

New Media’s stock dropped by more than 18% on Tuesday.

It could be that investors think New Media is paying too much for the Gannett assets.

Despite prospective cost savings, New Media is taking on fresh debt to the tune of a $1.8 billion loan from PE firm Apollo Global Management to finance this acquisition – and, eventually, New Media is going to have to pay that money back.