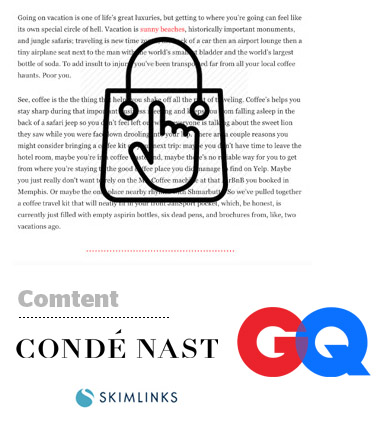 People who read about brands on GQ’s site spend twice as much time with its content overall – around 14 minutes – and are nearly 10% more likely to return, according to research commissioned from Skimlinks and Parse.ly.

“We’ve always created this kind of content for our magazines and our websites,” Rimmon said. “But over the past 18 months, we’ve been focused on creating a business model around it.”

A team at Condé strategizes how to monetize commerce content, and a growing number of commerce editors are embedded within most of Condé’s editorial brands.

Condé has had its ups and down with ecommerce experimentation. In June, the publisher shuttered its ecommerce platform, Style.com, less than a year after relaunching it, in favor of a partnership with luxury online retailer Farfetch.

The lesson learned: It doesn’t necessarily work when a publisher creates the content and sells the stuff. Just ask Thrillist, which acquired men’s flash sale site JackThread in 2010 only to spin it off into a separate company less than five years later.

But it can work – lucratively – when publishers stick to their roots and determine how to get credit for the upstream value they provide to the brands they write about.

“We know that readers come to learn from us about what kinds of products are recommended and fashionable,” Rimmon said. “But it’s only more recently that we’ve actually started getting rewarded for it from the retailers for whom we create demand.”

GQ has been a testing ground of sorts for commerce innovation at Condé. Over the past couple of years, GQ launched two shoppable hubs on its site and a weekly shoppable newsletter of product recommendations. Readers can even subscribe to receive quarterly merch boxes from GQ.

GQ may be the farthest along in its commerce journey, but nearly all of Condé’s brands are embracing commerce-related content to some degree, Rimmon said. Condé works with Skimlinks, Amazon and a few other companies to power an affiliate marketing program across most of its titles.

Even if publishers offer shoppable content, though, they often sit high in the funnel, driving aspiration rather than DR sales. But they still deserve a revenue bump for that, said Joe Stepniewski, chief product officer and co-founder of Skimlinks.

“This is service journalism – it’s why The New York Times acquired The Wirecutter, for example,” he said. “But it also goes back to brand building. GQ knows that it’s driving product interest even if the transaction happens offline.”

GQ also knows that engagement on its site increases over time when visitors read product recommendations. Skimlinks noted a 16% increase in average daily engagement when visitors to GQ included commerce content as part of their daily browsing.

That means it’s full steam ahead on commerce and content at GQ and at Condé overall, Rimmon said.